Elements to Consider When Designing a Publicity Campaign

To avoid problems, it is a good idea to pretest publicity campaigns with a sample target audience to ensure that the content has sufficient appeal and communicates the correct message.34

When it is appropriate to identify the agency responsible for the publicity campaign, avoid giving off an air of superiority when delivering the message, as this may turn off the audience, leading them to reject it. There may be times, however, when not identifying the agency producing the publicity campaign may prove beneficial. For example, a campaign targeting graffiti problems is likely to fail if it is sponsored by the Department of Public Works. While this agency may be responsible for implementing and reaping the eventual benefits of the campaign, offenders may not respond very well to messages coming from such a nondescript, generic entity.

Trying to scare people is not recommended when deciding on a campaign's content.

Publicity messages need to be relevant and offer specifics to the target audiences.

A well-designed logo can help to increase a publicity campaign's impact. This notion comes directly from commercial advertisements that are highly laden with pictures, cartoon characters, and other appealing visuals to attract customer attention.

Police should base their decisions about geographic coverage on the aims of the campaign:

Campaigns that advertise crime prevention tips generally run longer than those that advertise a specific police operation, but they run the risk of leaving their target audience feeling bored and indifferent.48 To avoid this problem, publicizing in "bursts" can be very effective. This method avoids drawn out, continual exposure to the message, but relies instead on short, focused, and intense bursts of information.49 Research shows that repetition is an important factor when it comes to retention,50 and small increments of publicity serve this goal well.

Campaigns that support police operations are often limited to the duration of the police intervention, but it is possible to begin the publicity before the intervention, and to continue it after the intervention ends. In this respect, publicity can amplify the perception of the police intervention, creating a greater deterrent effect. For example, if a police department develops a program to address auto thefts by implementing random checkpoints, the program can be advertised before, during, and after the operation. This informs offenders about the checkpoints but creates uncertainty as to when the police are actually out enforcing them.51

Implementation becomes especially relevant when the campaign is relatively short. Poor implementation protocols run the risk of reducing a campaigns intensity and overall effectiveness. In mounting a campaign, police should ask the following:

It is important for police agencies to be aware of their target audience's demographic composition. Publicity messages cannot be efficient if people cannot understand the basic content. Increased use of visuals and logos can promote messages more efficiently by relying on universally recognized symbols. This is important, for example, in populations with low literacy rates, or when addressing young children.

Having decided to implement a publicity campaign to advertise your crime prevention effort, should you adopt a general or a more tailored approach? The table below highlights some points to consider when choosing the publicity campaign's format.

Too often, practical considerations such as ease of production and cost determine the format, even though it may not be the most effective one. While budgets are important, to select an effective publicity format, it is crucial to understand the target audiences motivations and concerns. A common mistake is for police to think they know what message and format an audience will like and embrace. These decisions usually result in unattractive, poorly conceived, and ultimately ineffective campaigns.

A good example of a well-thought-out and appropriately chosen format is the "Spur of the Moment" comic book initiative Australia's National Motor Vehicle Theft Reduction Council used to describe the risks young car thieves faced (see below).52 In this case, the format spoke to the audience and increased the campaign's success. Ideally, to maximize a campaign's visibility, police agencies should rely on multiple avenues to disseminate information; relying on only one medium greatly reduces the campaign's potential reach.53 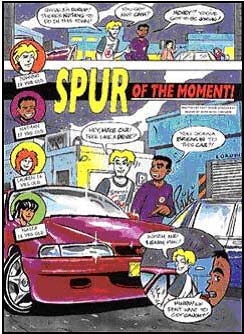 While national campaigns rely heavily on television or radio to address problems such as drug abuse and drunken driving, few police agencies rely on these media. However, television or radio spots can also be appropriate venues for local campaigns, as police departments can publicize efforts on the local news or in PSAs.54 PSAs are often ineffective unless they target a very specific group, provide a very detailed message,55 and air when the target audience is watching.56 Unless donated, television time and the professional work needed to make attractive televised messages are expensive. Many cities have community access channels, but the audience tends to be limited, and it is unlikely that police campaigns that rely on these channels alone will have great impact.

National newspapers and magazines, like television and radio, are more suited for national campaigns. Local papers are more suitable for reaching a large segment of the local population, allowing them to read and learn about police interventions. Unlike television and radio, print media are relatively cheap, but it is difficult to control who receives the information. Simply printing a message does not ensure that the target audience will read it. In addition, because the information is mixed with other information, there is a chance the target audience may overlook it. With any printed media, you should always consider community or audience literacy levels. 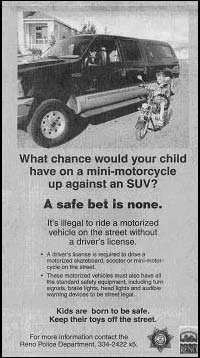 With their large imposing letters, billboards on highways and major roads ensure visibility. Billboards commonly advertise crime prevention techniques or otherwise educate the public about crime. In 2001, Los Angeles erected 60 billboards in gang-plagued neighborhoods carrying the message: "Guns ended the lives of 149 L.A. County kids last year. Stop the violence!" Billboards can also be useful in sharing target-hardening measures, as seen in the example below. While some billboard companies will donate space for public service messages, this medium is generally expensive. The design and production are also more elaborate than simple print media campaigns, and the message is confined to the billboards' location. 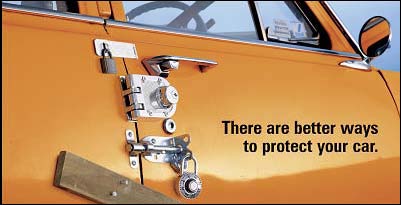 Example of a billboard to educate motorists

Posters and signs are relatively inexpensive to produce, and they are easily posted in relevant areas. Police agencies can place signs in specific areas, increasing the chances they will reach key audiences. Posters can be moved from location to location following police activity, but they are vulnerable to vandalism and destruction. Some communities may also have ordinances against posting signs on utility poles. Finally, plastering posters in a neighborhood may raise concerns about aesthetics or questions about safety. 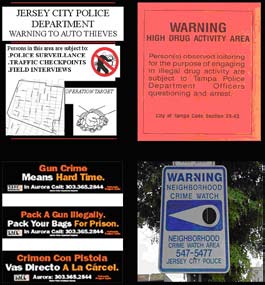 Mailings are also an effective method of distribution, but materials should be addressed to an individual, instead of "occupant" or "resident," as this personalizes the message.57 While some studies have shown newsletters and brochures to be effective ways to spread crime prevention information,58 such media do not always produce the intended result. In the early 1980's, the Houston Police Department failed to reduce residents' fear of crime by distributing newsletters containing local crime rates and prevention tips.59 In Newark, N.J., the police department used a similar strategy; while people liked receiving the newsletters, they rarely read them.60

Key chains reminding owners to lock their cars can be distributed at local stores, pencils or colorful stickers with messages against violence can be given to schoolchildren, and cards reminding drivers about the fines for speeding can be printed on the back of tollbooth tickets. A good example of an alternative medium was used in Birmingham, England, where police started mailing out Christmas cards during the holiday season to residents living in crime hotspots, offering them crime prevention tips.61 In a similar vein, Manchester, England, police sent holiday cards to known offenders in the area, reminding them to be on their best behavior by stating: "We are looking out for you."62

Other means to spread a message include coasters, as seen in the London Metropolitan Police effort to reduce drug use.63 This is an example of a cheap yet visible method to state your message or warning concerning the effects of drug abuse.

Coasters used to warn public about the dangers of drug use.

During one campaign for responsible alcohol consumption, a partnership was formed between bars, a National Football League (NFL) team, beer wholesalers, and police. An advertisement aimed at reducing victimization around bars was printed on table toppers, with the NFL coach giving "tips." The beer wholesalers agreed to distribute the table toppers as they delivered their product. Thus, the drinking public in bars and restaurants was specifically targeted.

As mentioned above, comic books can be a useful way to reach youths. A phone company in England created an educational comic book for children to address the problem of phone vandalism.64 On page 26 is an example of a comic book designed to reduce car theft.65

Without an evaluation, police departments will learn little about a campaign's successes or pitfalls, and there will be little evidence to support future use of the campaign. A valid evaluation should focus on two components of the campaign: its actual implementation (process) and the result (impact).

The process evaluation will determine if the agency carried out the intended plan for the publicity campaign. For example, if the campaign plan included weekly radio ads and posters in business storefronts, the process evaluation would measure the extent to which police met these weekly targets.

A process evaluation for publicity campaigns should ask the following questions:

The above questions are important, as they will guide the impact evaluation and provide contextual information about the overall effort's success or failure. If the process evaluation reveals that police poorly implemented the campaign, its effectiveness will remain questionable.

The impact evaluation will answer the basic question: Did the campaign have the desired effect? While the rate of the targeted crime problem is the first obvious measure, police departments should also consider other indicators when carrying out an impact evaluation of a publicity campaign. A community offended by a campaign's content may easily offset the gains of a minor crime reduction. A thorough impact analysis should consider measuring how a campaign affects:

The Police Department That Conducted the Campaign

To carry out an effective campaign evaluation, police agencies must think ahead and gather the requisite data for meaningful comparisons and analyses. Departments should have valid and reliable indicators of the measures discussed above to allow for pre-and post-campaign comparisons.

A good way to test the effectiveness of crime prevention messages is to select an area similar to the one chosen for the campaign to serve as a control group, not exposing it to campaign information.66 The control group will help in determining whether any changes observed are attributable to the campaign and not to other factors. An impact evaluation would then compare crime rates or resident behaviors between the two groups. In some cases, such comparisons can be misleading, however, as the publicity component may lead to a simple increase in crime reporting, falsely increasing the "crime problem."67