Sharing information, be it offering crime prevention tips to potential victims or trying to warn offenders about increased risks of arrest, inevitably draws attention to a community's crime problem. Police may therefore encounter some opposition to mounting a crime prevention publicity campaign from influential community members.

For example, a car theft campaign in a local shopping-mall parking lot may meet resistance from business owners who fear the campaign may scare away potential shoppers. Real-estate agents opposed anti-car theft publicity posters in one New Jersey town when clients became apprehensive about living in an area with a high car-theft rate.28 Other businesses that may express concern include tourism bureaus, entertainment venues, and educational facilities. Finally, local politicians may not approve of advertising crime problems in their jurisdictions, regardless of the potential prevention benefits.29 These examples highlight the importance of working closely with community stakeholders when developing and implementing publicity campaigns, as there may be competing interests at play.30

Publicity campaigns can sometimes result in residents' becoming unduly alarmed about relatively rare crimes.31Sometimes, this might lead them to take crime prevention matters into their own hands (such as by carrying weapons).32Therefore, campaign messages should avoid sounding too alarming or providing unnecessarily frightening information. Campaigns should address their targets directly, avoiding words that may alarm a community by highlighting a crime problem. For example, an anti-car theft campaign should avoid the following message: "This neighborhood is working to drive car thieves out". This sort of message may raise unnecessary community concerns about car thefts. A more appropriate campaign may state: "Car thieves are in for a ride straight to jail". A further undesirable result of some campaigns might be citizens' belief that police intrude too much in their daily lives. While these may not always be by-products of publicity, police agencies should be aware of them as they plan their campaigns. A possible solution to reduce heightened anxiety is for police departments to reach out to community members, explaining the reasons behind the anti-crime campaign.

Might a publicity campaign displace crime to an unprotected area, raising community concerns? Unfortunately, there is little information about publicity's impact on displacement. However, research has shown that displacement caused by crime prevention efforts is relatively rare and, if it occurs, is minimal at best.33 Fear of displacement should not hinder attempts to mount publicity campaigns, however, as proper planning and implementation can reduce the probability of such an outcome. For example, by alternating publicity across different neighborhoods, a police department can increase a campaign's deterrent value by creating uncertainty in the offending population. Offenders will not know where the real risks are, reducing the incentives for them to go elsewhere to offend.

Vandals or concerned stakeholders who do not agree with the campaign may deface street signs or billboards. In this case, rapidly repairing or replacing damaged signs is important, as the message must not be diluted or otherwise lose its significance. Campaigns that rely on street signs or posters are particularly at risk of vandalism. Wherever possible, campaign planners should place signs out of reach. In New Jersey, a Jersey City campaign to prevent auto thefts suffered considerable amounts of vandalism, as seen below. 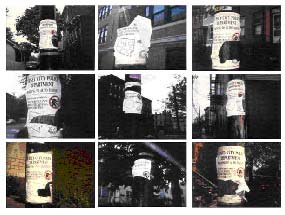