New Zealand Police’s Problem Oriented Policing (POP) awards have been running since 2013. The awards involve the proactive identification and analysis of recurring crime or disorder problems faced by police, partners and the public, and the development, implementation, and robust assessment of effective responses to these problems.

In 2017, the POP awards were renamed Evidence Based Problem Oriented Policing (EbPOP) to raise awareness of the importance of evidence in effective policing. Police districts and service centres submit a maximum of two initiatives each (from a selection submitted from their respective areas) for the national awards.  Awards are given to teams that demonstrate excellence in:

Click here to see footage of the 2020 EBPOP awards 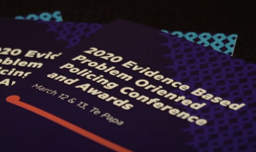 For further information on EbPOP in New Zealand, contact melissa.smith@police.govt.nz