The purpose of this guide is to provide an overview of the use of closed-circuit television (CCTV) systems as a problem-oriented policing response to a crime problem. This guide explores the benefits and problems associated with CCTV and summarizes the findings of numerous CCTV evaluations (see appendices A and B).

The public is now used to being watched by surveillance technology in many commercial and semi-public establishments such as banks, casinos, convenience stores, and shopping malls. About three-quarters of small businesses record who comes into their location on CCTV.1 There are systems that recognize license plates on moving vehicles and systems that monitor traffic flow and catch people violating traffic laws. There is also widespread use of police body-worn cameras. Although these systems fall under the label of video surveillance technology, they are not included in the discussion, as this guide is intended for the reader considering CCTV as a crime prevention option for a broader range of property and personal crimes in public places. Examples of relevant public spaces include:

Although some see CCTV as a panacea to crime and disorder in public places, others view the growth of CCTV as an intrusion, with visions of an Orwellian ‘Big Brother’ invading personal privacy. This guide will help you better understand the effectiveness of CCTV and address some constitutional and privacy concerns. After you read this guide, you should not only be aware of the strengths and weaknesses of CCTV in a public setting, but also be able to answer many of the public’s concerns.

Closed circuit television (CCTV) is a surveillance technology. More specifically, it is “a system in which a number of video cameras are connected in a closed circuit or loop, with the images produced being sent to a central television monitor or recorded.”2 Technological advancements now allow CCTV systems to work on wireless networks, operated remotely, and be watched from several locations.3 The term closed circuit television was originally used to differentiate between public television broadcasts and private camera-monitor networks. These days CCTV is used as a generic term for a variety of video surveillance technologies including Police Observation Devices (POD) or Portal Overt Digital Surveillance Systems (PODS).

Although some systems are extremely sophisticated, employing bullet-proof casing, color recording, night-vision capability, motion detection, gunshot detection, and advanced zoom and automatic tracking capacities, many existing systems are more rudimentary. More common CCTV installations include a number of cameras connected to either a control room where human operators watch a bank of television screens or an unmonitored data storage system.

Often an operator can pan, tilt, and zoom a number of cameras. As the technology has developed, cameras with a full range of movement and control facilities have become the norm, and it is likely there will be continual improvements in optical and digital zoom, color, and pixel† resolution, all of which will enhance image quality.

Including the human element, we can categorize systems into passive—where banks of recording devices record images that can be replayed if a crime is reported, though nobody actively monitors the images, and active—where a person sits and monitors a series of displays in real time. In reality, many systems are a hybrid, where recording devices record all images, and an operator scans from monitor to monitor, concentrating on some and ignoring others. 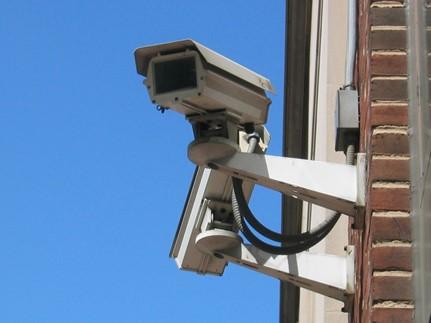 With an overt CCTV camera, the public (and offenders) can clearly see the surveillance camera and determine the direction in which it is facing. Credit: Jerry Ratcliffe

Although most CCTV schemes employ overt cameras, which are obvious (see Figure 1), it is possible to find systems in which cameras are mounted into protective shells or within frosted (polycarbonate) domes. Often termed semi-covert, these camera systems make it more difficult for people under surveillance to determine if they are being watched, as it is usually difficult or impossible to figure out in which direction the camera is facing (see Figure 2). Some cameras employ dummy lenses to conceal the surveillance target. The advantage of using a one-way transparent casing is that it provides for the possibility of retaining the overt impression of surveillance—and hence a deterrent capacity—without having to place a camera in every housing or to reveal to the public (and offenders) the exact location under surveillance.4 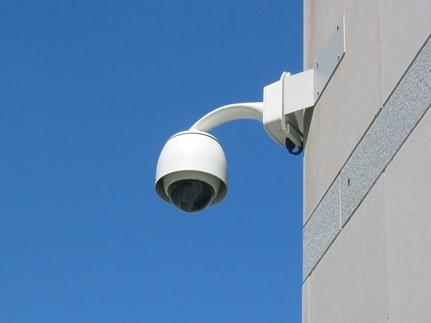 This semi-covert CCTV camera may have a crime prevention advantage over an overt system because offenders can never be sure in which direction that camera is facing. Credit: Jerry Ratcliffe

In addition to the cameras, the cabling to feed images to the monitors, and the recording devices, a CCTV system also requires an operator to watch the monitors or review the recordings. Because of this, a full description of CCTV should not ignore the human element. Reviewing video, acting on the information, and preparing video evidence for court or investigations all create a potential need for ongoing office space and personnel costs over and above any initial capital expenditure. There may also be extra demands placed on local law enforcement as a result of increased surveillance of an area. With increased surveillance, more public-order crime may come to the notice of police. With technological and personnel costs, CCTV comes at a considerable price. Though the technological costs continue to fall, the human costs do not. Therefore, you must give CCTV serious consideration before you purchase and install a system to combat a crime problem. A later section details some of the factors to consider before deploying a CCTV solution.

In summary, there is a range of CCTV configurations available. A complete CCTV system (for the purposes of this report) comprises:

Variations to this basic configuration include:

More-advanced systems can include limited facial recognition technologies or estimate the location of firearm incidents, though more advanced systems often rely on other technology. For example, a facial recognition program is of limited value unless it is linked to a computer database of suspect photos. Intelligence systems that can detect unusual activity (such as fights in the street) are also under development.5

In addition to determining if you want to install a CCTV system (and what type), you should consider how sophisticated you want it to be and if you have the resources to support it.