Problem-oriented policing identifies partners whose help is needed in dealing with specific problem. In an ideal case, community policing does this as well. If the problem is assaults around bus stops, a necessary partner will be the local transit authority. If the problem is shoplifting, then the cooperation of local businesses is needed. Community members often identify problems. Specific members of the public (including offenders) can have important insights useful for problem analysis. Community members can help implement solutions (for example, in fitting deadbolts or not giving money to beggars). And the success of a problem-solving effort might be defined in terms of community reaction. But rarely can the community at large help with the specialized technical work involved in problem analysis, solution development, and evaluation. In addition to partnering around specific problems, community policing also seeks out partnerships among the community at large (and government organizations) in order to increase the level of trust and general cooperation with them. In this sense, it goes beyond the partnerships described under problem-oriented policing. Agencies that adopt the broader general philosophy of community policing should be careful not to let these partnerships with a different purpose (building trust and cooperation) dilute the more focused problem-solving partnerships and efforts that the community policing philosophy also encourages.

These distinctions are most easily confused when the focus of a problem-oriented project is a deprived neighborhood. In this case, the project should proceed by identifying the collection of individual problems that together make up the greater one (see Step 14). Rather than attempting to build a relationship with the community at large, a problem-oriented project focuses on solving the specific problems of, say, drug houses, commercial burglaries, and bar fights. To the extent that members of the community become productively involved in solving these discrete problems, they may be a rather different group of individuals in each case. Broader partnerships with the community could be developed in order to build trust between police and the community and this can make the problem-solving process easier; however, even in the absence of widespread community support, problems need to be systematically addressed.

It is also important to understand the difference between problem-oriented policing and broken windows policing. Under the former, specific solutions to the variety of problems confronting the police emerge from careful and detailed analysis of the contributory causes of each. By contrast, "broken windows" advocates the same general solution - policing incivilities and maintaining order whenever crime shows signs of becoming out of hand. This approach is based on two principles, the first of which is that small offenses add up to destroy community life. For example, littering one piece of paper is nothing terrible, but if everybody does it the neighborhood becomes a dump. The second principle of broken windows is that small offenses encourage larger ones. For example, abandoned and boarded up properties often become the scene for drug dealing and can spawn more serious crimes. This important insight has led some cities to pay much more attention to policing against small offenses.

All policing requires discretion, and broken windows policing requires some very important decisions to be made by officers on the street. (This is why it should not be confused with "zero tolerance" which is a political slogan, impossible for the police to deliver because it would soon result in clogged courts and an alienated population.) One has to figure out which of the small offenses multiply into more crimes and which do not. For example, New York City subway system managers learned that young men jumping turnstiles to travel free often committed robberies within the system. Controlling the minor crime helped reduce the major one. But the subway managers also learned that those painting graffiti did not normally commit more serious crimes. Although their efforts to control graffiti were very effective (see Step 41), they did not reduce robbery.

Problem-oriented policing also addresses these less serious offenses even if there is no expectation that they will lead to worse problems. Vandalism in a public park might not increase the chances of robbery, but it does destroy public facilities, so it is a problem that needs to be addressed. Citizens in a neighborhood may be very concerned about speeding, traffic congestion, or noise. As long as these meet the criteria for a problem (Step 14) they are addressable by POP, even if there is no expectation that the neighborhood will deteriorate should these go unaddressed.

Crime analysts are given a central role in intelligence-led policing, which puts a premium on the need for sound information to guide policing operations. However, intelligence-led policing is primarily a methodology for producing sound, useable intelligence. It does not guide police through the whole process of designing and implementing a crime reduction initiative in the way that the SARA model is intended to do. Nor does it give a central role to crime analysts at every stage in such an initiative. This is why problem-oriented policing has a great deal more to offer crime analysts and why it expects much more of them.

Finally, problem-oriented policing is not the same as CompStat, though they share some common features. Both focus police attention, though CompStat as normally practiced restricts itself to geographic hot spots while POP can be applied to a wider array of crime concentrations. Though both use data to drive police action, the variety of data and depth of analysis used in POP is greater than quick-paced CompStat targeting. CompStat uses law enforcement tactics almost exclusively, while POP uses these along with a wider variety of responses. CompStat may have short-term impacts on geographic hot spots of crime that wear off and require more enforcement. A problem-oriented approach seeks longer-term solutions. If CompStat is used as a "first-aid" response while POP is applied to enact a longer-term cure, then the two approaches can work well together. 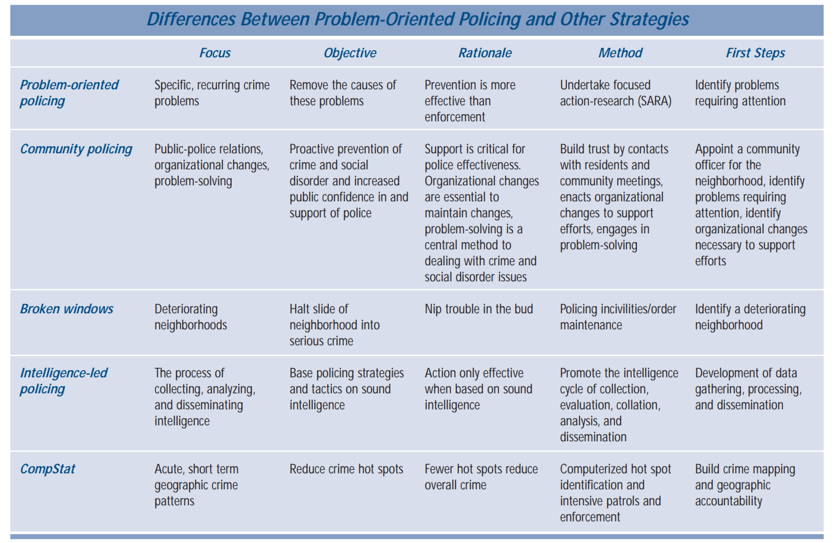