Responses to the Problem of Pharmacy Robbery

The following response strategies provide a foundation of ideas for addressing your particular problem. These strategies are drawn from a variety of research studies and police reports. Several of these strategies may apply to your community’s problem.

It is critical that you tailor responses to local circumstances and that you can justify each response based on reliable analysis. In most cases, an effective strategy will involve implementing several different responses. Law enforcement responses alone are seldom effective in reducing or solving the problem.

Do not limit yourself to considering what police can do: carefully consider whether others in your community share responsibility for the problem and can help police better respond to it. The responsibility of responding, in some cases, may need to be shifted toward those who have the capacity to implement more effective responses. For more detailed information on shifting and sharing responsibility, see Response Guide No. 3, Shifting and Sharing Responsibility for Public Safety Problems.

For further information on managing the implementation of response strategies, see Problem-Solving Tools Guide No. 7, Implementing Responses to Problems.

While a great deal of research has focused on what works to prevent and reduce comparable crimes such as robberies of convenience stores, violence against small businesses, and prescription drug abuse, there have been no studies evaluating methods to prevent and reduce robberies of pharmacies specifically. This crime problem differentiates itself from otherwise comparable crimes because pharmacy robberies usually target drugs, not money.

A number of local, state, and federal efforts to discuss the problem of pharmacy robbery, create guidelines, and educate potential victims have emerged since the problem escalated a few years ago. These are described in the responses below. Many of these actions and guidelines include excellent ideas, but very little documentation exists on their implementation and effectiveness.

Increasing the Risk of Detection

1. Informing pharmacy employees about robbery trends. Some data exist for pharmacy robberies nationwide, and some may exist for the local jurisdiction. You should analyze these data, add your experiential knowledge, and educate pharmacies about the trends and patterns—such as likely days and times for robbery, suspect profiles, and types and locations of pharmacies and drugs that are being targeted. With this knowledge, pharmacy staff can at a minimum be more alert or, if possible, increase staffing during higher risk days and times or maybe even modify procedures for handling the higher risk drugs.

2. Providing prevention guidance to pharmacy employees. The more employees who are aware of how to identify suspicious customers and behaviors, how security systems work, and appropriate procedures during a robbery, the greater the odds that robberies can be prevented. In addition to the DEA Tip Sheet shown in figure 1, several other guides have been created. The San Diego Police Department has a detailed document titled “Preventing and Dealing with Pharmacy Robberies,” available on its public website. Two similar efforts were launched in Australia. The Pharmacy Guild of
Australia created “Pseudoephedrine-Related Break and Enter: 10 Practical Tips,”† and WorkCover New South Wales designed a fact sheet/checklist titled “Managing the Risk of Robbery and Violence in Pharmacies.” The Saskatchewan Pharmaceutical Association created the “Pharmacy Security Guide,” which includes information on exterior security, alarm systems, interior security, robbery procedures, and check lists. British Columbia’s Pharmacy Association authored “Guidelines for Addressing Pharmacy Robbery in B.C.” The Pharmacy Technician Certification Board (U.S.) recently increased their efforts to educate pharmacy technicians about pharmacy robbery.

† While this document is focused on robbery, most of the tips are also relevant to and can help reduce the potential for burglary as well.

Figure 1. Pharmacy Robbery & Burglary: Tips to Protect Your Customers, Your Business, and Yourself Prevention Tips

3. Managing risk factors. As described in the previous section, the risk of pharmacy robbery may be related to the physical environment design of the pharmacy, dispensing procedures, staffing, and other contextual factors. If employees are aware of risks, they can take steps to manage them better. The UK Pharmacists’ Defence Association created a “Personal Safety Resource Pack” to educate pharmacists about violence and how to reduce and manage risk. This also includes a risk assessment tool. While not specific to pharmacy robberies, many of the points are relevant.

4. Installing a panic alarm. While a standard burglar alarm may help prevent the burglary of a pharmacy during hours it is closed, a panic alarm at the pharmacy counter can be used to surreptitiously notify authorities during a robbery in progress.

5. Using a video surveillance system. Cameras should cover entrances, exits, and high-risk areas such as the pharmacy counter. They need to be positioned to capture full facial views, and the monitor should be large enough and positioned so that the offender will notice it.‡ While there have been no evaluations of the use of closed-circuit televisions (CCTV) in pharmacies, an analysis of 1,900 burglaries in the RxPATROL§ database revealed that in 77 percent of them, the pharmacy had no video surveillance cameras.17

6. Tracking the stolen drugs/offender. Both GPS tracking units installed in decoy pill bottles, and DNA tracking spray have been used in a few jurisdictions. While there are success stories of post-robbery identification and conviction, caution should be taken as there is no evidence to show that either is effective in preventing the robbery from occurring.

7. Using deterrent signage. If individuals perceive a pharmacy to be more aware of and better managing the pharmacy robbery problem through the use of federal prosecution, they may choose to go to a different pharmacy (see figure 2). 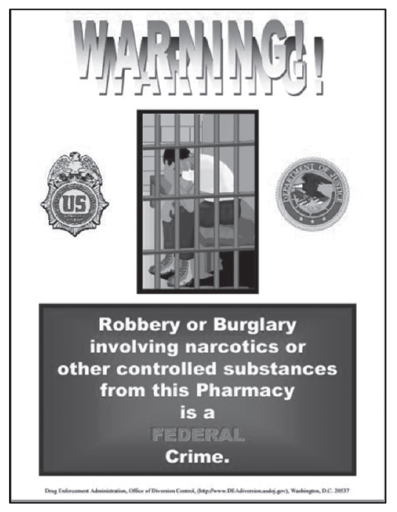 § RxPATROL® was created by private industry in conjunction with law enforcement to collect, analyze, and disseminate pharmacy crime information. According to the website (www.rxpatrol.com), there are 8,514 crimes in the database (as of 5/1/15), of which 3,335 are robberies and 1,980 burglaries.

8. Employing security measures. Pharmacy owners and employees can use several strategies to control pharmacy robbery. There are a number of checklists available to assess the pharmacy’s security. One such checklist is available via the National Association of Drug Diversion Investigators’ website and includes alarms, physical design and barriers, locks, CCTV, and restricting access. Another example is the “Security Assessment Template” from the Pharmaceutical Society of Ireland and An Garda Siochána. The assessment includes collecting information on location (to include staffing, hours, etc.), external grounds, building (external), building (internal—physical), building (internal—security), and security procedures and controls.

Specific measures include the following:

a. Increasing pharmacy lighting. Having a brightly lit exterior as well as interior increases the natural surveillance and visibility of the potential offenders.

b. Locking up drugs. Whether in a locked cabinet or a safe, many pharmacies use this extra security for the drugs that are most often targeted. Another tactic might be to fill targeted-drug prescriptions only after closing hours and prominently notify customers of this practice. The location of the safe can also aid in hardening the target. In the same analysis of RxPATROL data described earlier, it was found that 84 percent of the pharmacies that were burgled had no safe.18 There are many types of safes; pharmacies should consider burglary-resistant over fire-resistant ones. Burglary-resistant safes have a rating system relating to how difficult and time-consuming breaking into it will be. One example, specially designed for dispensing drugs, is PharmaSafe™ (See figure 3). The only way to open the safe is to process a prescription.

c. Installing physical barriers. Some police and security experts recommend putting bullet-proof glass or steel barriers at the dispensary window. While it has yet to be evaluated specifically for pharmacies, this strategy has shown to have some effect in reducing robbery at banks and convenience stores.†

d. Ensuring front windows are clear. The extent of natural surveillance that allows people passing by to see inside may prevent a robbery. This tactic has proven to be effective in reducing convenience store robberies and is similarly effective if the pharmacy is in a store where no one can see in due to advertising posters covering the front windows.

* See the Problem-Specific Guides No. 48, Bank Robbery and No. 49, Robbery of Convenience Stores for more detailed discussion of barriers and bullet-proof glass security strategies.

9. Limiting the drugs available. Some pharmacies have chosen not to carry OxyContin or other drugs that are commonly sought during robberies. Other pharmacies limit the amount they have in stock.

10. Limiting the drug information available via telephone. Implementing a policy by which store employees do not tell people over the phone if they have any available prescription drugs (robbers are unlikely to hit a store when the supply of desired drugs is uncertain).

11. Conducting focused surveillance and enforcement. Surveillance and enforcement may yield an immediate but limited impact and often does not produce long-term results. A police focus on a specific pharmacy prone to robbery may catch one person or offender ring, but others may continue to rob a pharmacy that does not have sufficient prevention measures in place. Given the low volume of incidents and limited police resources, the practice cannot be sustained as a means to prevent or reduce the problem.

12. Increasing penalties for pharmacy robbery. The Safe Doses Act (H.R. 4223, enacted October, 2012) increases penalties for robbing a pharmacy. However, proof that this or other individual state legislation is effective is lacking.