by Michael S. Scott with Nina J. Emerson, Louis B. Antonacci, and Joel B. Plant

The Problem of Drunk Driving

Simply put, drunk driving is a police concern because alcohol increases the risk that drivers will get in traffic crashes and kill or injure themselves or others. Alcohol impairment is the primary factor in traffic fatalities.1 In the United States, where drunk driving is among the most common types of arrest made by police, the number of alcohol-related crash deaths§§§ is roughly the same as the number of homicides.2 In addition, vehicle crashes are the leading cause of death in young people ages 15 to 20; many of these are alcohol-related.3

Drunk driving is one of a number of problems police confront that relate to impaired and dangerous driving. Others, which may require separate analysis and response, include:

§§§§ Much, but not all, of the information in this guide also pertains to the problem of driving under the influence of other controlled substances.

Drunk driving harms individuals and communities in many ways.

One of the reasons drunk driving is of such concern to police is that it is an offense committed by a broad spectrum of the population, including those who are otherwise generally law-abiding. An estimated one-fifth to one-fourth of U.S. drivers admit to having driven after drinking at least once within the past year,4 and about five percent estimate that they were legally impaired.5 Drunk drivers come from all parts of the population spectrum, but are more likely to be male,6 white or Hispanic,7 between 25 and 44 years of age,8 unemployed or working class,9 and unmarried.10 Drunk drivers are more likely to be heavy drinkers or to have drinking problems.11 Drinking drivers under 21 years of age are about twice as likely as older drivers to be involved in fatal vehicle crashes.12

Recent roadside surveys in the United States indicate that about three percent of drivers at any particular time are legally impaired. On weekend evenings the number of drunk drivers rises significantly: about eight percent of all drivers have blood alcohol concentrations greater than .05, and an additional nine percent of drivers have had at least one drink, meaning that on weekend evenings around 17 percent of all drivers are operating their vehicles under the influence of at least some alcohol.13, § Considering the high traffic volume during this period, it is clear that there are a lot of impaired drivers, especially compared to the limited law enforcement resources that are available to investigate suspected incidents of drunk driving.

§ Blood alcohol concentration is typically measured as a ratio of grams of alcohol per deciliter of blood or per 210 liters of breath.

Although the general public and the police are perhaps most concerned about wholly innocent persons who are killed in alcohol-related crashes, it is in fact the drunk driver or his passenger who is most likely to be killed.14 In recent years, significant reductions have been achieved in the number of young drivers killed in alcohol-related crashes, due largely to higher legal drinking ages, greater licensing restrictions on young drivers, and stricter enforcement of juvenile drunk driving laws.15, §§ 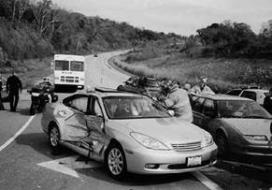 Alcohol is a primary factor in a large number of fatal traffic accidents. In fact, the number of U.S. alcohol-related traffic deaths is roughly the same as the number of homicides. Credit: Milford (Ohio) Community Fire Department

A relatively high percentage of drunk drivers—perhaps one-third to one-half—consume their alcohol in a licensed establishment such as a bar or restaurant.24 Nearly one-half of drivers with measurable levels of alcohol in their systems claim to have been drinking at the home of a friend, making social hosts an important factor in controlling drunk driving.25 In addition, a significant amount of drinking is done in vehicles themselves, especially by underage drivers who are not permitted in licensed establishments and by drivers with serious alcohol problems.26

Understanding the factors that contribute to drunk driving in your jurisdiction can help to frame local analysis, to identify effective remedial measures, to recognize key intervention points, and to select appropriate responses.

Drunk driving is very much the result of a cultural norm that emphasizes drinking alcohol as a form of entertainment and driving as both transportation and entertainment. 27 Cultural drinking habits also shape drunk driving patterns. For example, drunk driving will be more concentrated on weekend nights in countries where such nights are considered prime time for heavy drinking. The extent of drunk driving also depends, obviously, on the availability of vehicles, so it is less likely in societies and communities where vehicles are prohibitively expensive.

Perhaps the single most significant factor in explaining why people drive while impaired is that they believe that there is little risk that they will be caught by police—and statistically, they are correct. By some estimates, the average drunk driver will drive while impaired between 80 and 2,000 times for every time he is apprehended, depending on the enforcement capacity of the local police. 28 In fact, most drivers believe they are more likely to be involved in a crash than they are to be stopped by police.29

Even the most committed police agencies and officers can stop or arrest only a very small percentage of the impaired drivers who are on the road at any one time—probably less than one percent. There are several reasons this is so:

The low probability that they will be stopped or arrested by the police on any particular trip undoubtedly leads many drivers to conclude that they can drink and drive without getting caught.

Compounding the difficulty of estimating impairment is the fact that some police officers try to arrest only those drivers who they believe have high blood alcohol concentrations, either because they prefer to prosecute only strong cases or because they do not want to be criticized for wasting scarce police resources on borderline cases. Consequently, some officers systematically fail to arrest impaired drivers because they are only searching for the most impaired. 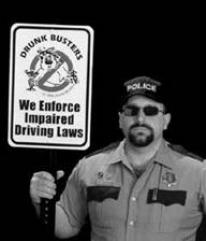 Although police want to create the impression that all drunk drivers will be arrested, in reality only a small percentage of drunk drivers on the road at any particular time will in fact be stopped or arrested. Drunk Busters of America

Serving obviously intoxicated guests and patrons increases the risk of drunk driving, especially when drinking occurs at a location that most guests and patrons must drive to. Absent adequate enforcement of the laws that prohibit serving intoxicated patrons, overserving is notoriously common. The combination of the social pressure put on servers by patrons and the economic pressure to maximize profit can often overwhelm a server's better judgment.