The Problem of Burglary of Retail Establishments

Retail burglaries are a problem for many communities. A British survey found that stores lose as much to burglars as they do to shoplifters. These losses impact the viability of businesses and, consequently, of the communities around them. Although much research has been conducted on burglary in general, little of it has specifically focused on retail burglaries—break-ins at stores to steal cash or goods.† However, the research that has been done points to a number of effective responses to the problem. This guide reviews what is known about retail burglaries, suggests ways to analyze them in your jurisdiction, and provides guidance as to appropriate responses.

† This guide also covers smash-and-grabs and so-called "ram raids." Smash-and-grabbers rely on the element of surprise to break display windows or showcases and escape before the alarm sounds. Ram raiders use stolen vehicles to smash their way into buildings, usually after hours. They grab what they want and make a quick escape, often in another vehicle.

The businesses covered in the guide include shops in downtown areas, in strip malls, in covered malls (or "shopping precincts," as they are known in the United Kingdom), and in retail parks. They also include stand-alone superstores, neighborhood stores and rural stores, as well as restaurants, beauty parlors and off-track betting establishments. Not covered are wholesale warehouses or retail outlets in industrial parks.

The problem of retail burglaries needs to be distinguished from those of (1) other retail thefts and (2) other commercial burglaries. These problems, which should be addressed separately, include:

Compared with residential burglaries, commercial burglaries—especially retail burglaries—have been the subject of few studies. In part, this is due to the much larger number of residential burglaries, but it is also generally believed that commercial burglaries have less serious consequences for victims and for the community at large. However, growing recognition of the important part small businesses play in urban regeneration has heightened concern about crimes that might reduce their viability.1 In turn, this has led to more research on crimes against businesses (including retailers), particularly in the United Kingdom, Holland and Australia. As a result, we now know more about retail burglaries, though our knowledge is still patchy. The following are the best-established facts:

† There seem to be no comparable data for the United States, though the commercial burglary rate (calculated for the number of premises at risk) in one large northeastern city in 1968-69 was found to be nearly 10 times higher than the residential burglary rate (Conklin and Bittner 1973).

† For example, the commercial victimization survey conducted by the British government in 1995 found that only 2 percent of break-ins were ram raids (Mirlees-Black and Ross 1995).[Full Text]

Understanding the factors that contribute to your problem will help you frame your own local analysis questions, determine good measures of effectiveness, recognize key intervention points, and select appropriate responses.

Not all stores face the same burglary risks. Some are in areas with low crime rates, and some are not. Some are open for longer hours, perhaps around the clock. Some sell goods that are less attractive to thieves due to their low value or bulk. Some are located where they receive constant surveillance from passing traffic or pedestrians. Research tends to confirm these factors' effects on burglary risks, though there are several reasons why we can draw few definitive conclusions:

For all these reasons, we cannot yet make firm statements about all the risk factors in retail burglaries. However, by piecing together research findings in the United States and abroad, we can be fairly sure that the risks vary with the following store factors: location, premises, size, goods sold, length of time in business, and security precautions.

Studies of crimes against small U.S. businesses have found that retail burglary rates are highest in deprived inner-city neighborhoods, and lowest in small towns and rural locations. This probably reflects variations in the number of offenders living close to the stores.11

People's presence in and near stores protects them from burglary, and this factor varies with the nature of the premises. For example, several studies have suggested that stand-alone superstores located away from the downtown area are particularly at risk, because the sites are deserted at night. Supermarkets open around the clock are protected from burglary by the staff's constant presence, and mall stores seem to be at reduced risk because they tend to be protected by security guards after hours.† Shops in busy downtown areas also appear to have lower burglary risks, again due to the constant surveillance passersby provide.12

† Stores with attractive goods can have higher burglary rates even if they close late (Mirlees-Black and Ross 1995).[Full Text] 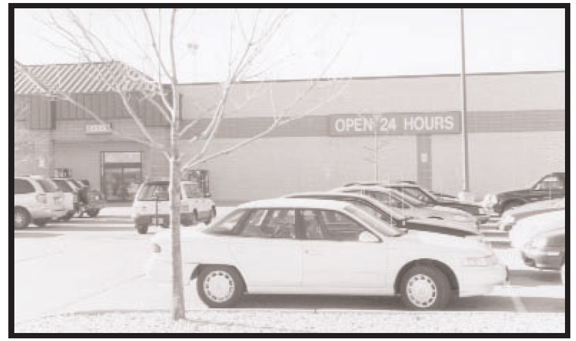 Stores that are open around the clock are protected from burglary by the constant presence of staff. Credit: Kip Kellogg

National victimization surveys conducted in Australia and the United Kingdom have found that smaller shops have lower burglary rates than larger ones.13 This may be due partly to location (downtown shops tend to be smaller than those in retail parks or malls), and partly to the smaller number of goods to steal.

Research has clearly established that shoplifters exhibit strong preferences in the goods they steal, and that stores carrying these goods are particularly at risk (see the Shoplifting guide in this series). In the United States, shoplifters favor tobacco products (particularly cigarettes), health and beauty products, recorded music and videos, and clothing (designer, in particular). The more-limited research on retail burglaries shows similar preferences,14 with some predictable variations resulting from differences in shoplifting and burglary methods. For example, burglars are more likely to target electronic goods, such as videocassette recorders and televisions, than are shoplifters, who would have difficulty taking such goods out of a store without being seen. A comparison of supermarket goods stolen by shoplifters and burglars found that both groups targeted cigarettes, liquor, and health and beauty aids, but as would be expected, the burglars stole these in much larger quantities than did the shoplifters. The burglars also robbed store ATM machines.15

Length of Time in Business

Newer businesses have higher victimization rates than older businesses.16 This might indicate that stores become more experienced in preventing crime the longer they are in business—or that store survival depends on resisting crime.

Stores at greatest risk of burglary tend to take the most precautions, and while these precautions may reduce the risk of burglary, they do not entirely eliminate it. It is also the case that stores often increase their security after being burgled. These facts could help explain why some studies have found little statistical relationship between stores' level of security precautions and their rate of burglary.17 However, evaluations of recent crime prevention projects in Britain (the Safer Cities project and the Small Business and Crime Initiative) have concluded that improved security at recently burgled stores can reduce repeat burglaries and, as a result, overall burglary rates in targeted areas.18 In addition, some studies have produced evidence of the effectiveness of specific measures, such as installing burglar alarms and hiring security guards. While often falling short of proof, this evidence is reviewed below in the "Responses to the Problem of Retail Burglary" section.