The information provided above is only a generalized description of retail burglaries. You must combine the basic facts with a more specific understanding of your local problem if you are to develop an effective response. In most cases, your burglary problem is likely to involve a group of stores, such as those in a downtown area or in a particular mall. In other cases, your problem might be related to stores of the same general type (say, pharmacies or building supply stores).† If the problem involves a single store (unless it is a very large store), you might more appropriately deal with it by offering routine crime prevention advice rather than undertaking a full-scale problem-oriented policing project. Your analysis is likely to focus on differential burglary risks among the stores in your group, and the reasons for those differences. Your analysis should address the risks of repeat victimization, as some particularly effective responses are focused on repeat victims. Bear in mind that registers of businesses may use corporate names, which may be different from "doing business as" names. The registers are also frequently outof-date, and you might need to make your own list.

† Each of these variations in retail burglaries deserves its own guide, but the information provided here should be sufficiently broad to provide assistance in all cases.

In general, you should seek to establish what kinds of offenders are involved, what kinds of stores they target, how they gain access to the stores, how they deal with security measures, and, finally, how they dispose of stolen goods. Knowledge of these factors will help you design an effective response to the problem.

Police crime reports or calls-for-service data do not generally distinguish the different kinds of nonresidential burglaries. Retail burglaries are lumped together with burglaries of educational institutions, medical centers, offices, and construction sites. Consequently, gathering information about your local problem can be labor-intensive. It requires a careful review of police records and the identification of retail burglary incidents. Fortunately, the large majority of retail burglaries are reported to police, but it can still be difficult to identify repeat burglaries because locations may not be systematically recorded. For example, the store name might be included in some crime reports, and only the street address in others.

In addition, many important details about the type of business, points of entry and nature of losses may not be included. Thus, you should try to gather systematic information about these details using other data sources. Because gathering and analyzing data can be time-consuming and involve technical problems, you should seek help from your local university, especially one with a criminal justice department. Data collection methods that can provide useful information include the following: 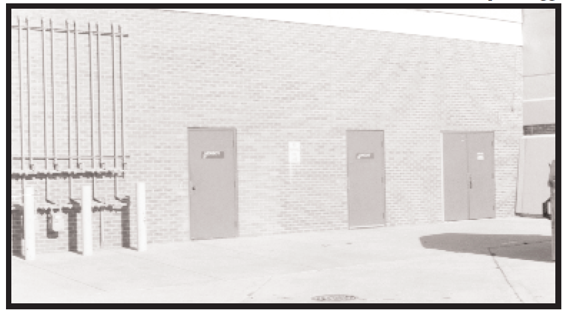 Site surveys of stores should include an assessment of the natural surveillance, lighting and security of the stores' rear entrances. Credit: Kip Kellogg

The following are some critical questions you should try to answer in analyzing your particular retail burglary problem. Your answers to these and other questions will help you choose the most appropriate set of responses later on.

Measurement allows you to determine to what degree your efforts have succeeded, and suggests how you might modify your responses if they are not producing the intended results. You should take measures of your problem before you implement responses, to determine how serious the problem is, and after you implement them, to determine whether they have been effective. All measures should be taken in both the target area and the surrounding area. (For more detailed guidance on measuring effectiveness, see the companion guide to this series, Assessing Responses to Problems.)

The following "outcome" measures can be useful in assessing whether your responses have impacted the retail burglary problem:

In addition, the following "process" measures might provide some indication of the degree to which selected responses are being properly implemented: