Appendix A: The Effects of the Number of Time Periods on the Validity of Evaluation Conclusions

To understand the importance of examining a large number of time periods, consider the following hypothetical example. The data here were created using a random number generator, so none of the fluctuations are systematic. This series illustrates how we can be deceived by randomness, particularly if we look at very short time intervals. All the charts that follow are from the same series.

Figure A1 shows the results of a pre-post evaluation where measures of the problem are taken just before and just after a response (time periods 19 and 20 in the series). The conclusion we would draw from this chart is that the problem experienced a moderate decline following the response. 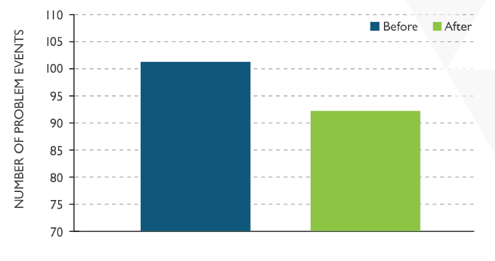 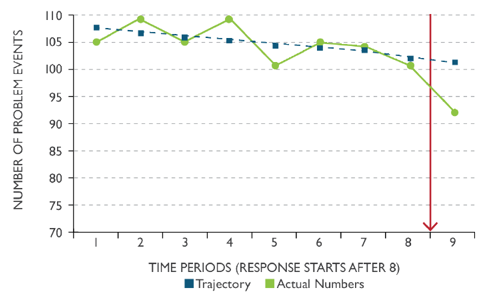 The periods prior to the response help establish the trajectory of the problem time series. Here we focused exclusively on the overall trend, but it is also possible to look for seasonal cycles and other recurring fluctuations.

We see that the problem rebounded and then seems to oscillate around the same trend line. So at best, the response was temporarily helpful.

The value of a very long time series cannot be overstated. Too often police agencies show only a few time periods even though their computer systems contain data for many more. Note how our interpretation of the trend changes when we look at the entire 40-period series from which these three charts were extracted. This is shown in Figure A4.

Figure A4: Forty-period Time Series Design (with average number of events per period)

Whereas the trend in Figure A3 suggests a downward trend, Figure A4 shows that this was an illusion; in fact, the longer-term trend is flat. The underlying randomness of the data becomes much more apparent. It oscillates around 101 events per period (dotted line). Further undermining our confidence
in the response, we can see that there are at least two other intervals with declines like we see after the response. So it appears that what we thought was a decline due to the response may very well be a temporary fluctuation due to normal variation in the problem.

The lesson here is that it is easy to be deceived by randomness, particularly when analyzing crime over short time periods. The police, public, news media, and elected officials are all susceptible to this deception, because comparing this month to last month, or this year to last year is so common. Using
multiple measures and using a longer time series are reasonable guards against this sort of deception.

Unlike real data, where one is never quite sure of the cause, with this intentionally random data we know with absolute certainty that the variation around the 101 events per period average is random.† This includes the periods just before and after the response. The example illustrates the point that random fluctuations in data can be easily misinterpreted as meaningful changes. It is worth noting that a significance test to detect randomness in a pre-post design might actually suggest that the drop is not due to random changes. This is because the randomness affects the entire series and the pre-post design only looks at a small part of the series.

† We created this data series by setting a constant level for the problem and then used a random number generator to provide the fluctuations around this level. We placed the beginning of the hypothetical response at the center of the series.