How Can Risk be Reduced?

Although there are many ways to reduce risk (see Table 3), it is important to focus on those that are most likely to succeed. For example, it is usually impossible to do anything about the size and location of specific facilities. Similarly, changing a facility's physical design can be difficult or costly and would only be justified in an extreme case. On the other hand, it may be easier to change business practices that facilitate or encourage crime and disorder; this, however, cannot be done without the full cooperation of those who own or manage the facilities, as they are usually the ones who must implement and pay for the measures. Before moving on to a discussion of the various ways of convincing facility managers to make the changes necessary to reduce crime or disorder, it is important to understand some of the reasons why they might not have done these things on their own. The reasons can include the following.

Although it is always best to assume that managers and owners want to reduce crime and disorder in their facilities and that they will be open to working with the police and others to implement the necessary changes, the list above suggests that they will sometimes resist implementing remedial measures. Consequently, it will sometimes be necessary to exert a certain amount of coercion, either directly or indirectly. There are several ways that this can be done.§

1. Publicity. The greater risk of using a particular facility can be made known to the public. Publishing statistics regarding calls for service from local motels or crimes in local parking lots can shame managers into acting or force them to act to avoid losing business.
2. Sanctions. Local governments can use civil enforcement procedures to shut down facilities that are persistent trouble spots. There is considerable evidence that the threat of civil sanctions is quite effective in coercing owners to address victimization problems.21 Sanctions can range from fines to license revocation and facility closure. 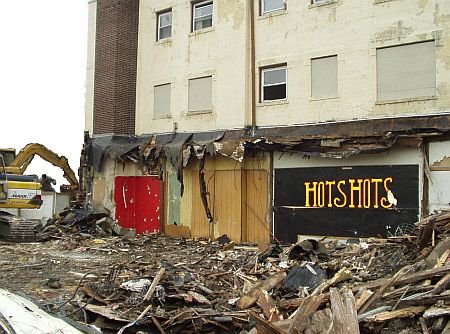 Demolition of a former bar and drug dealing hot spot: Removing a very risky facility can be the best way to reduce crime Credit: John Eck

3. Certification programs. Police and local authorities can certify premises and facilities for their security. These certification programs can be voluntary or compulsory. For example, police in the United Kingdom operate a voluntary safe car parks scheme of this type. 22
4. Voluntary codes of practice. Managers or owners of specific types of facilities in a particular region or locality can agree to follow certain practices designed to reduce crime. An example of this would be the accords made between the managers of pubs and clubs in entertainment districts in Melbourne, Surfers Paradise, Geelong and elsewhere in Australia to reduce drink-related violence. 23
5. Performance Standards. Recently, the Chula Vista Police Department has been experimenting with the use of performance standards.24 Based on an analysis of crime frequency and negation, a maximum number of crimes is established for facilities of a particular type. This standard can be expressed as a rate, to account for size. Facilities that exceed the performance standards are sanctioned. Along the same lines, the Oakland Police Department entered into an agreement whereby a motel chain agreed to attempt to reduce crime and disorder at one of its problem motels.25 This agreement was guaranteed by a performance bond that required the chain to pay $250,000 to the city if the goal was not reached within two years. It was left to the motel chain to decide which security measures to introduce; it decided to upgrade lighting and fencing, replace the managers and security guards, conduct pre-employment background checks on all new employees, establish strict check-in procedures, maintain a list of banned individuals, and prohibit room rentals of more than 30 days. Crime was greatly reduced by this initiative (see Table 4), which earned the Herman Goldstein Award for Excellence in Problem-Oriented Policing for 2003.

In practice, a combination of approaches—both a carrot and a stick—might be the most effective strategy. Because business owners can be politically powerful, it may be far easier to reduce crime if management is induced to cooperate without engaging in a political battle. In this regard, it is important to recall the guiding principle of this guide, the 80-20 rule: most of the problem is likely to be the result of a few facilities. So it might be that enlisting the support of the majority of facility owners and managers—whose contributions to the problem are minor—to change the behavior of the few—whose contributions to the problem are major—can aid police in winning the political struggle. This can also reduce costs by focusing resources where they are needed most, which can aid in tailoring responses to particular settings, thereby increasing the chances that interventions will be effective.