Responses to the Problem of Street Racing

The following response strategies provide a foundation of ideas for addressing your particular problem. These strategies are drawn from a variety of research studies and police reports. There is little published research about street racing; most of what is known is drawn from police practice. Several of these strategies may apply to your community's problem. It is critical that you tailor responses to local circumstances, and that you can justify each response based on reliable analysis. In most cases, an effective strategy will involve implementing several different responses. Law enforcement responses alone are seldom effective in reducing or solving the problem. Do not limit yourself to considering what police can do: give careful consideration to who in your community shares responsibility for the problem and can help police better respond to it.

General Considerations for an Effective Strategy

1. Enlisting community support for addressing the problem. Broad-based coalitions that incorporate the interests of the community are recommended. A combined effort will maximize the effects of responses and enhance the likelihood of success. The involvement and support of public officials, citizens, and business owners will be essential for the success of most, if not all, of the specific responses listed below.

Enlisting community support might include using members of a police Explorer post, citizens' police academy, senior citizens' groups, merchant association, and so on to report racers' activities to police.29 Community support might also come from those who provide racers with their equipment, including shops selling high-performance car parts, and who are at risk for being burglarized for these parts. Although these shop owners may not wish to cooperate, if so inclined, they can be of considerable assistance in informing the police about racers' illegal activities.

2. Educating and warning street racers. Street racers can be informed about the dangers and legal consequences of racing,as well as police enforcement intentions. Among the media you can use are street racing websites (on which they commonly announce past and future events, host chat rooms, and have message boards), police agency websites, newspapers, television, radio, and personal contacts with street racers. A publicity campaign about the problem and enforcement actions has been central to many efforts to combat street racing problems. Performance shop owners also might be asked to provide customers information about existing laws and potential penalties for racing.
3. Conducting surveillance of the street racing scene. Street racers can be quite sophisticated in their efforts to avoid detection by police. Unmarked police vehicles, plainclothes officers, and video equipment may be covertly used to observe racers' movements and methods and to determine the problems they create, where they live, the kinds of cars they drive, license plate numbers, and so on. This allows for pre-race intervention, access to race areas to be closed off, and participants to later be charged. Racers' use of police scanners can be thwarted by using radio code words, in-car computers, and specially programmed cell phones. For example, one police agency programmed some cellular phones with a group-talk feature so that the officers and dispatchers could communicate effectively without using the police radio frequency when dealing with racer issues.30 Marked units and uniformed personnel can then be called in to assist with any arrests. During undercover surveillances, police can videotape illegal street races and participants; later, crime reports can be written for each race and used to prepare arrest warrants for drivers and court orders for vehicle seizures.31 Street racing websites can also be monitored for tracking racers' activities and communication.
4. Encouraging others to exercise informal control over street racing participants. You may identify certain groups, organizations, or individuals who have the potential to exert significant influence over the behavior of street racing participants. For example, if street racing participants are high school students, school administrators might be persuaded to suspend or revoke the parking privileges of students identified as participants in or spectators of street racing incidents. Insurance companies, which also have an interest in the problem, may be persuaded not to pay claims for damages if the claimant was participating in racing.† Parents of street racing participants, properly educated about the dangers of street racing, may be encouraged to get more involved in controlling their children's behavior.

5. Enforcing ordinances and statutes. You should review existing ordinances and statutes to determine whether police have adequate enforcement authority. Laws likely to be enforced against drivers include racing/reckless driving, driving under the influence of alcohol or drugs, and driving with suspended/revoked licenses. In some jurisdictions police officers and vehicle emission enforcement agents jointly conduct smog equipment inspections on street racing vehicles, issue the owner a citation if the equipment was disconnected or modified, and even order the vehicle removed from the street until it is brought into compliance with the law.32 Officers might also attempt to identify people in the emissions testing industry who issue fraudulent emission certificates for the illegally modified vehicles.33 Drivers should be checked for proof of insurance and vehicle registration. Officers can work with automotive experts to identify street racing vehicles that have been illegally enhanced or altered, or have mechanical defects. Enforcement against non-drivers might include violations for trespassing on private property of adjacent businesses, obstructing traffic (if standing in the roadway), or aiding in a speed contest (for people acting as starters for races). Dedicated race patrol teams may be necessary for concentrated enforcement during peak racing times.34Enforcement of curfew laws might also reduce the numbers of juveniles present at racing venues.

Following are some examples of how many police agencies have been aided with newly enacted ordinances and statutes in their attempts to prevent and address street racing:

6. Impounding and/or forfeiting vehicles used for street racing. Vehicles may be impounded and a fee assessed in order for the owner to retrieve the vehicle under an ordinance when the driver is arrested for engaging in a speed contest, for reckless driving, or for demonstrating exhibit of speed (e.g., peeling or screeching of tires due to hard acceleration). A vehicle forfeiture ordinance may be enacted to declare a vehicle a nuisance and it can be permanently seized if it was used in a race or exhibition of speed and the driver has a prior conviction for certain serious driving offenses (such as reckless driving or evading officers).7. Encouraging private businesses to adopt measures that will help address the problem. Owners and managers of popular street racing gathering places (where street racers meet and plan their activities, show off their cars, socialize, and the problems begin to occur) must be enlisted in efforts to discourage street racing activity. Among the helpful measures are: posting "no trespassing" signs and authorizing police to enforce them, limiting after-hours access, employing private security during weekends, and closing earlier.
8. Closing streets and/or altering or restricting traffic flow and parking. Some jurisdictions have installed speed humps, barricades, "k-railing" (concrete barricades), and freeway message signs and billboards (both permanent and temporary) to control, warn, and inform racers;42 others authorize police to erect barricades and close streets when racing becomes a problem.43 Such latitude affords police the ability to move quickly to deal with problems as they develop. Parking can be prohibited on public properties and roadways in the race area to discourage spectators from congregating along roadsides during prime racing hours; offenders' vehicles can be towed. 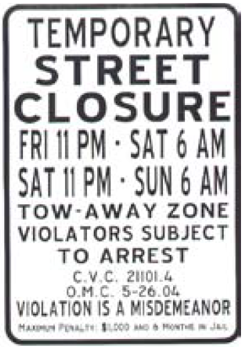 9. Creating or encouraging racers' legal alternatives, such as relocating to a legal racing area. Several cities and counties have successfully addressed their illegal street racing problem by creating, either on their own or in collaboration with other organizations, a legal racing venue. This is intended to divert people to a safer racing environment, which allows racers to experience some of the positive aspects of legal drag racing—the fun, camaraderie, and excitement. Police can either align with an existing national program (for example, Beat the Heat, Racers Against Street Racing, the National Hot Rod Association) that encourages safe, legal, on-track racing, or implement their own local program.† Participant rules should be in place, such as racers must possess a valid drivers license and vehicle insurance, submit to vehicle safety inspections, and refrain from any use of alcohol at the event.44

Following are examples of such efforts:

10. Installing speed bumps. The installation of speed bumps can reduce or halt street racing, but they are hazardous to emergency vehicles and large trucks. Speed humps, on the other hand, which are more gradual than speed bumps, permit vehicles to cross them safely at the speed limit and create less risk to trucks and emergency vehicles.
11. Arresting and charging spectators as race participants. Arresting participants for unlawful assembly or curfew violations can be ineffective if a local court rules that street race spectators are not participants.
12. Citing and releasing racers. Issuing citations to racers or spectators may be ineffective and a weak deterrent, because many such individuals believe that a citation is "just part of doing business." Furthermore, some parents disagree with laws intended to curb racing and believe that their children should be allowed to observe such activities and will simply pay the fine for the youth.50
13. Deploying decoy police vehicles. Placing "phantom cars"—unoccupied marked police cars—in racing areas to create the appearance of a police presence will generally not be effective, and the vehicles may be vandalized.51