Defining Problems with Specificity and Accuracy

As a general rule, the more specifically you define a problem, the greater is your likelihood of addressing it effectively. This is so because even seemingly similar problems usually vary in significant ways that affect what sorts of interventions are likely to be effective. For example, although all robbery problems have in common the fact that the activity is prohibited under the same robbery statute, there are obvious and significant differences among robbery problems. Street robbery, robbery around automated teller machines, highway robbery, taxicab robbery, delivery robbery, bank robbery, and convenience store robbery each occur in such different physical environments that the specific causes and effective prevention measures are likely to be quite different among these different problems.

Although, as is done in the list of common policing problems in Appendix A, problems can be described in shorthand terms, when seeking to tackle a real problem strive to define it in as complete and precise terms as possible, incorporating if possible the behavior, people, place, and time elements in the full problem description. As an illustration, rather than seeking to tackle an entire class of noise problems in a single initiative, San Marcos, Texas, police narrowed the problem to loud parties in an off-campus residential community, a considerably more coherent and manageable problem.6

Patterns from Which to Identify Problems

By definition, a policing problem comprises a cluster of incidents that are similar to one another in one or more ways. The four principal ways in which incidents might be similar are the following:

Figure 5. This frequency distribution chart is structured to make it easy to see which motels have statistically high police-call rates and are thereby deemed problematic. 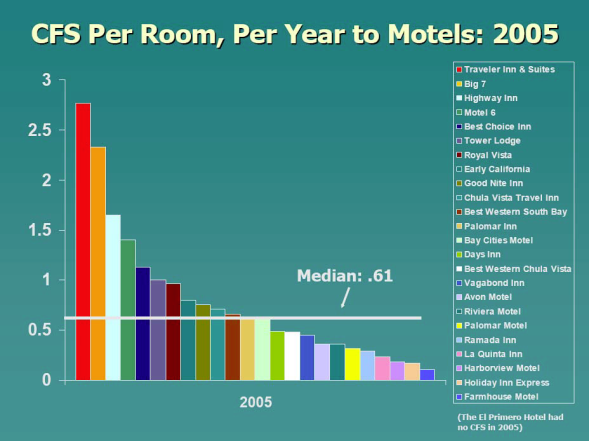 Having laid out these four pattern types, understand that defining problems in terms of the people, places, or times involved is nearly always just a shorthand description of a problem that involves problematic behavior or hazardous conditions. Behavior should nearly always be at the core of any problem definition, whatever the shorthand label. A good rule of thumb is that every problem definition should include at least one verb, thereby focusing attention on some specific, problematic behavior. Describing problems as, for example, a “drug problem,” a “homeless problem,” a “park problem,” or “a bar-time problem,” might be useful shorthand for those intimately familiar with the problem, but it risks sounding too vague or too broad for those not familiar with the shorthand. Adding a behavioral word or phrase to the problem definition greatly clarifies matters, as for instance: a “drug trafficking problem,” an “assaults of homeless people problem,” a “sexual assault in a park problem,” or a “drunken driving around bar-time problem.”

To encourage even greater specificity, try also to include a place (or environment) descriptor in naming the problem. This is important because research and practice is increasingly showing how important the physical context of a problem is to its solution.7 Adding the place descriptor further clarifies the nature of the problem, as for instance: a “drug trafficking in apartment complexes problem,” an “assaults of homeless people in homeless encampments problem,” and a “drunken driving around bar-time on highways problem.”

In Enfield, we did not want to reduce this problem to a “gangs issue.” Rather than target “gangs,” we chose to look at individuals within these groups and decide on a case-by-case basis what would be the most suitable response to a particular individual in relation to their level of activity and involvement (particularly as not all “gang members” are criminally active). This would require a mixture of prevention, intervention, and enforcement targeted at gang members and their associates (who were both the victims and offenders).

This process of taking apart a general problem to understand its various specific forms is tremendously important toward effective problem solving. For example, understanding how one drug market differs from other drug markets helps in figuring out the necessary responses to each of them. Having gone through this de-aggregation process, however, it might make sense to then re-aggregate some problems if the discrete problems are similar enough that particular responses will effectively address multiple specific problems. For example, if one were to discover that thieves and burglars alike were selling their stolen goods in the same stolen-goods market, measures taken to disrupt that stolen-goods market could prove effective in controlling both the theft and burglary problems even if those theft and burglary problems were in many other respects quite different from one another.

As you make progress in analyzing a policing problem, it is a good idea at some point to consciously reflect on whether the problem ought to be redefined.8 Consciously redefining a problem can open up entirely new approaches for addressing it. As an illustration, police in one community had defined a problem involving various forms of disorderly behavior on the street as being a problem of homeless offenders, in large measure because their analysis indicated that a high percentage of offenders engaged in disorderly public conduct were indeed without permanent residences. As police sought the assistance of homeless service providers in the community, they realized that the service providers resented the insinuation that all homeless people were disorderly, a fact that the service providers knew to be statistically untrue: in their experience, the overwhelming majority of homeless people were not habitually disorderly. Both the police and the service providers were largely correct when viewing the problem from their respective points of view. When the police consciously redefined the problem as one of chronic nuisance offenders—leaving homelessness out of the definition—doing so not only improved the cooperative relationship with the service providers, but it also helped police realize that the condition of being homeless was not, in fact, a significant contributing factor to street disorder: other factors, such as alcohol abuse, were far more significant and thereafter received greater focus in the problem-solving initiative.