by Joseph B. Kuhns

The Problem of Drug-Impaired Driving

This guide begins by describing the problem of drug-impaired driving and reviewing factors that increase its risks and negative outcomes. It then identifies a series of questions to help you analyze your local drug-impaired driving problem. Finally, it reviews a number of responses to the problem and summarizes what is known about these responses from evaluative research and police practice.

Drug-impaired driving—which generally refers to a driver operating a vehicle while having a measurable quantity of a drug (legal or illegal) in the body that impairs driving performance—is a major road and safety concern in many countries, according to a wide variety of sources. In 2009 in the United States, about 4 percent of drivers (or 10.5 million) were drug impaired while driving.3 Among high school seniors, drug-impaired (specifically, marijuana-impaired) driving rates may be higher (about 14 percent from 2001 to 2006) than those of the general population.4 Roadside surveys of drivers' oral fluid and blood samples reveal that among all weekend nighttime drivers, over 16 percent tested positive for illegal, prescription, or over-the-counter drugs, any of which could impair driving.5 Estimates of the prevalence of drug-impaired driving across different countries—including Australia,6 Germany.7 Canada,8 and New Zealand,9 among others—vary considerably. Regardless of the rate, the problem merits police attention, given the potential harms.

According to a number of studies, young males between the ages of 17 and 24 are at the highest risk for drug-impaired driving offending and victimization,10 although female involvement is increasing.11 Among high school seniors, drug-impaired driving occurs across multiple demographic groups, although lifestyle factors tend to play a stronger role in predicting such driving.12 Persistent offenses of drug-impaired driving among males have been linked to marijuana dependence; early traffic violations, nontraffic violations and convictions before age 18; and personality characteristics such as a weaker ability to control one's behavior, to avoid harm, and to respect tradition during the offending driver's teens.13 In Finland, drugged driving is associated with low education and high unemployment, receiving disability pensions, and higher rates of divorce or living alone.14 Given the varying ways in which these studies have been conducted, there is good reason to believe that many drug-impaired drivers are never detected.

Driving under the influence of marijuana—the most commonly used illicit drug—may actually be more common than driving under the influence of alcohol in some countries.15 Some marijuana users perceive marijuana to be a safe drug to use before driving and thus indicate that changes in laws may not influence their future decisions to continue using marijuana before driving.16 These perceptions are particularly troubling given the decriminalization and the changes in medical-marijuana laws that are occurring, or that have already occurred, in the United States and elsewhere. Indeed, driving under the influence of marijuana increases the risk of being involved in motor vehicle crashes.17 However, the drug-impaired driving problem extends well beyond the use of marijuana and includes the use of a wide variety of legal drugs (including those prescribed and those obtained over the counter) and illegal drugs—which include stimulants, depressants, antidepressants, narcotics, hallucinogens, sleeping pills, and other intoxicating substances.18

Drug-impaired driving can damage communities in a number of ways, many of which are similar to the harms associated with drunk driving.† These harms can include the following:

Jurisdictions with significant local drug market activity likely have correspondingly high drug-impaired driving problems, notwithstanding the availability of mass transportation or the proximity of users to illicit markets. To the extent that drugs, including prescription drugs, are readily available and easily obtainable—whether through illicit markets on or off the street, through legitimate or illegitimate (usually recreational) prescription markets or through other means (e.g., Internet-based purchasing, nightclub transactions, concert distribution, discreet markets, and medical marijuana outlets)—the risk of increased drug-impaired driving is higher when and where drugs are readily available. Certain drugs or drug categories may be more risky than others,25 although a number of factors affect the level of impairment, including dosage, frequency of use, and use of other substances.

Open-air drive-by drug markets (those to which users drive up and purchase drugs without getting out of their cars) are of particular concern because potential users are already in vehicles as drugs are being purchased, and those buyers may return for additional drugs within a matter of minutes or hours, depending on the particular substance. In addition, jurisdictions that have difficulty controlling access to legal prescriptions or that have particularly high rates of prescription drug use within their populations (e.g., jurisdictions that mainly include elderly persons or that include large groups of mentally ill patients who are medicated) might create substantial public safety challenges. Finally, jurisdictions with relaxed drug laws (e.g., allowing the use of medical marijuana or decriminalizing the use of marijuana) might also have higher rates of drug-impaired driving. 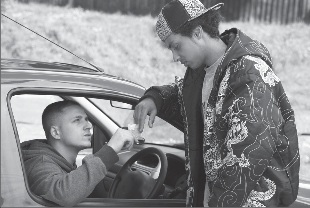 Drive-by drug purchases, such as the one pictured here, are of particular concern as users are already in vehicles.

Misperceptions of Risk of Injury or Apprehension

Drug use can affect users' perceptions of the risks associated with substance use, can alter decisions and influence behaviors and can decrease user concerns with apprehension. Despite evidence to the contrary, some marijuana users26 and users of other drugs27 perceive minimal risk associated with driving following substance use, and perceptions of risk seem to vary across different drugs and drug use patterns.28 As a result, some drug users are more likely and more willing to drive while impaired, and their willingness to do so can affect other drug users, who may then be inclined to drive following their own drug use at some point in the future. To the extent that drug-impaired drivers successfully make it to their destinations and avoid being apprehended by police, their willingness to continue to use drugs while driving increases risks for other drivers as well.

Combining Legal or Illegal Drugs Along with Alcohol

Using multiple drugs simultaneously or using drugs in combination with alcohol significantly impedes driving performance,29 which is a particularly important concern in situations or places where alcohol and drugs are readily available and consumed simultaneously (such as nightclubs, parties, raves, and concerts). For example, nightclub attendees in Australia reported both recent drug use and a likelihood of driving home with someone who is drug impaired and, possibly alcohol impaired as well.30 Although some rave attendees have reported higher levels of concern with impaired drivers,31 young people, in particular, are willing to accept rides from drugged drivers.32 In addition, a prior experience of driving while drug impaired increases the likelihood of doing so again; it also increases the chances of accepting rides with others who are drug impaired.33