Places can change over time and become either better or worse. The concept of a criminal career can be applied to a place. There is a four-stage model of a park's criminal career that is based on a study of crime in U.S. and Canadian national parks.9 This model can help police assess a park and provide the correct response to the stage.

This four-stage model is shown here as a cycle of decline and renewal since the potential for either increased crime and disorder or recovery is always present. Parks are dynamic systems, and change is the only given.

Stage 1: Onset: The Threat of Disorder and the Rise of Fear

In the majority of the parks studied, problems started with what the researchers called "visible signs of depreciative behavior." Such depreciative behavior and related disorder are often seen as being "soft crimes" because of the relatively minor or nonserious nature of the offense. However, one can argue that if unchecked, then these gateway offenses lead to a spiral of more-serious crime and disorder by causing discomfort—even fear—in legitimate park users.

This version of the broken windows thesis§ may explain how parks can fall into disorder and crime if no one regularly maintains them. Poor maintenance sends cues that can encourage a potential offender. The would-be offender sees graffiti, vandalism, dog fouling, and litter as signs that no one cares or is in charge. It is a question of the perceptions of the potential offender and other park users. Inaction by park management may lead to increased and potentially more-serious offenses.

It is critical that the park management and police pay attention to the signs of disorder, the potential for increased crime and disorder, and the community concern about such issues. The fear of crime is often more about the perception that there is an increase in crime and disorder than it is about a real increase. 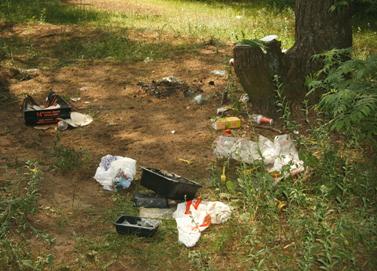 Poor maintenance and conditions such as litter, graffiti and vandalism send cues to would-be offenders that the park is uncared for or that no one is in charge. (Credit: Jim Hilborn)

As mentioned, successful park crime-and-disorder policing is a deliberate combination of community policing and problem-oriented policing. There should be a balance, since too vigorous a focus on order maintenance can damage police and community relationships. Having a good working relationship with the local community is critical for crime prevention and community safety in the park.

Stage 2: Diversification and Escalation: Whose Park Is It?

Public space such as a park will always be a "contested space." For example, a dog owner wants his dog to run freely, but a runner or a mother with small children wants the dog on a leash. And no one likes dog fouling. Such conflicts are inherent to the park: dog owners versus runners, the old versus the young, drinkers versus nondrinkers, etc. Policing crime and disorder in a park usually involves negotiation with a wide range of users to arrive at a mutually acceptable solution or solutions. If the conflict isn't going to be resolved peacefully, then one side or another must lose. Park management and police must pay attention to conflict between users and/or complaints from users. Such information can be a clear signal that the park's ownership, along with its use, is starting to change.

As legal use declines, the park can head toward a "tipping point" from safe to unsafe. The escalation of crime and disorder generally ends with a high-profile public incident that formally defines the park as a dangerous place.

It is clear that if park management and police don't sufficiently act to preserve the perception of the park as a safe place, then law-abiding users' perception can change, with the park no longer seen as safe. The perception that the park is becoming risky can quickly become a reality. The loss of trust in the park management and police can then lead to legitimate users' abandoning the park. It is important to avoid this by responding to people's concerns as soon as possible.

People usually voluntarily go to a park. The local community as well as "outsiders" visit the park. As people's perceptions, or sense of place, change from feelings of attachment and belonging to negative emotions such as unease and fear, the park usage decreases.

While there may be hot spots of criminal and antisocial activity, the perception of risk will often exceed the actual level of crime and risk in the park as a whole. People's perceptions of crime and the associated fear will not only prevent them from using parks, but also the negative sense of place can accelerate the speed of the park's abandonment as well.

In Stage 4 of the model, the police and park management take back control of the park. This involves (1) reestablishing guardianship, and (2) actively recruiting legitimate users to lessen the park's vulnerability to crime.

There are both passive and active measures that help to restore control.

Passive efforts focus on blocking access to the park or removing the physical elements that facilitate crime. Changes in design and maintenance remove criminal opportunities. In Boston's (Massachusetts) Franklin Park, for example, motor vehicles had almost unlimited access. Public safety began to improve only after the parks department blocked some of the old carriage entrancesand protected the park's internal spaces from vehicular traffic.10 In other places, public areas used for illicit sex or for drug-related activity were opened up to natural surveillance through landscape management techniques.

Active techniques involve direct intervention by motivated people, such as legitimate users and/or park personnel, who organize the take-back effort. These people choose to become natural guardians of their park. The message now being sent to offenders is that "someone cares."

Boston's Franklin Park Coalition has worked to bring multiple law enforcement officials together to coordinate their coverage of the park and to share ideas and information. As a result, the local community no longer sees Franklin Park as dangerous.11 The coalition works to ensure that there is police response and park maintenance.

Deploying uniformed personnel to confront illegitimate users is the most common tactic used to take back an unsafe park. There must be a demonstration of the jurisdiction's willingness to confront people engaged in crime and disorder, and to use sanctions. The reclamation of New York's Central Park involved the development of park enforcement patrols and an urban park ranger program both to confront crime and disorder and to establish the highly visible symbols of police uniforms.

Dealing With Crime and Disorder in Urban Parks