The Problem of Burglary at Single-Family House Construction Sites

What This Guide Covers

Burglary at single-family house construction sites is the taking of property from houses under construction or from the area immediately surrounding the house. Depending upon whether the person who stole the property was lawfully on the premises or not, the crime is either defined as burglary or theft. For convenience sake, this guide will refer to both crimes as construction site burglary.

There is far less research on construction site burglary than there is on residential burglary.[1] However, construction site burglary has been recognized as a significant problem in the United States and elsewhere in the world, including Canada, Australia, Europe, and Japan.[2] Estimates from the United States indicate that between $1 billion and $4 billion worth of materials, tools, and construction equipment are stolen every year.[3] The wide range of estimates is attributable to the lack of reporting to police and insurance companies by builders and contractors.[4] Between 5 percent and 20 percent of the cost of building a residential subdivision goes to the burglary of tools and equipment.[5] In addition to property losses, there are indirect expenses that also impact the cost of construction; these include job delays, downtime for operators, higher insurance premiums, and cancellation of insurance.[6] These direct and indirect losses to builders and contractors are passed on to house buyers, resulting in an average increase of 1 percent to 2 percent in the price of a new house.[7]

Understanding the factors that contribute to the problem of single-family house construction site burglary will help to frame local analysis, to determine good effectiveness measures, to recognize key intervention points, and to select appropriate responses. The following factors make such construction sites particularly vulnerable to burglary.

Certain practices by building contractors can contribute to burglary. For example, delivering appliances to a site before they can be secured in the house increases the opportunity for burglary. Lax tool tracking practices can also lead to theft. Builders and contractors may save time by not checking tools in and out daily, but a lack of control and oversight can give employees the impression that their employer does not care if tools are taken or may convince them that burglars are unlikely to be caught and prosecuted.[10] Finally, many builders treat burglary as an unavoidable cost of business[11] and seek to offset their losses by increasing house prices. 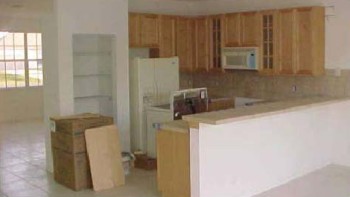 In this house under construction, the front door was left wide open with
appliances left uninstalled in the kitchen.
Credit: Rachel Boba and Roberto Santos

Burglars commit burglary, quite naturally, for the money. The decision to burgle is influenced by the perception of the ease with which a crime can be committed; in addition, burglars are commonly influenced by others.[12] Burglars often know their victims, who can include casual acquaintances, neighborhood residents, people to whom they have provided a service, or the friends or relatives of close friends. Burglars either do not give much weight to the potential consequences of their actions or believe that there is little chance of getting caught. And in fact they are correct: burglars are rarely caught; national burglary clearance rates are only around 13 percent.[13] Clearance rates for construction crime in particular are not recorded nationally, but these offenders seem to be caught even less often.[14]

Although little specific research has been done, some researchers have classified construction site burglars into three categories: amateur opportunists, insiders (such as employees and rival contractors), and professional thieves.[15] Common to all of these types is the ability to blend in with regular construction workers.[16] There follows a more detailed discussion of each type of construction site burglar.

Amateur opportunists: Amateur opportunists live or travel near construction sites, see property on the site, and take it based upon an immediate evaluation of rewards and risks. They do not typically plan their crimes in advance, but rather act upon an immediate opportunity. However, they may also take property after seeing it unprotected for a long period of time as they travel past the construction site. Burglary of smaller materials and tools at times when workers are not present may indicate this type of offender.

Insiders: Insiders work for builders, contractors, or rival companies. They either have knowledge of a specific builder's construction practices and access to keys, tools, and materials, or they have a general knowledge of construction practices, such as how to disassemble an air conditioning unit or the stage at which appliances are typically delivered. Generally, a high percentage of employee thefts begin with opportunities that are regularly presented to them. If security is lacking and management is indifferent, the temptation to take items that are improperly secured or accounted for may be too much for these individuals to resist.[17] Daytime burglaries, the theft of goods with tight schedules between delivery and installation, or burglaries where complex deinstallations occur with minimal property damage may indicate that crimes are being committed by insiders.

Construction sites are interesting places. People passing by may stop to see what is being built or may even walk through the site. The simple curiosity that draws many people to construction sites also increases the probability that some people will then trespass or take unprotected property from the site. 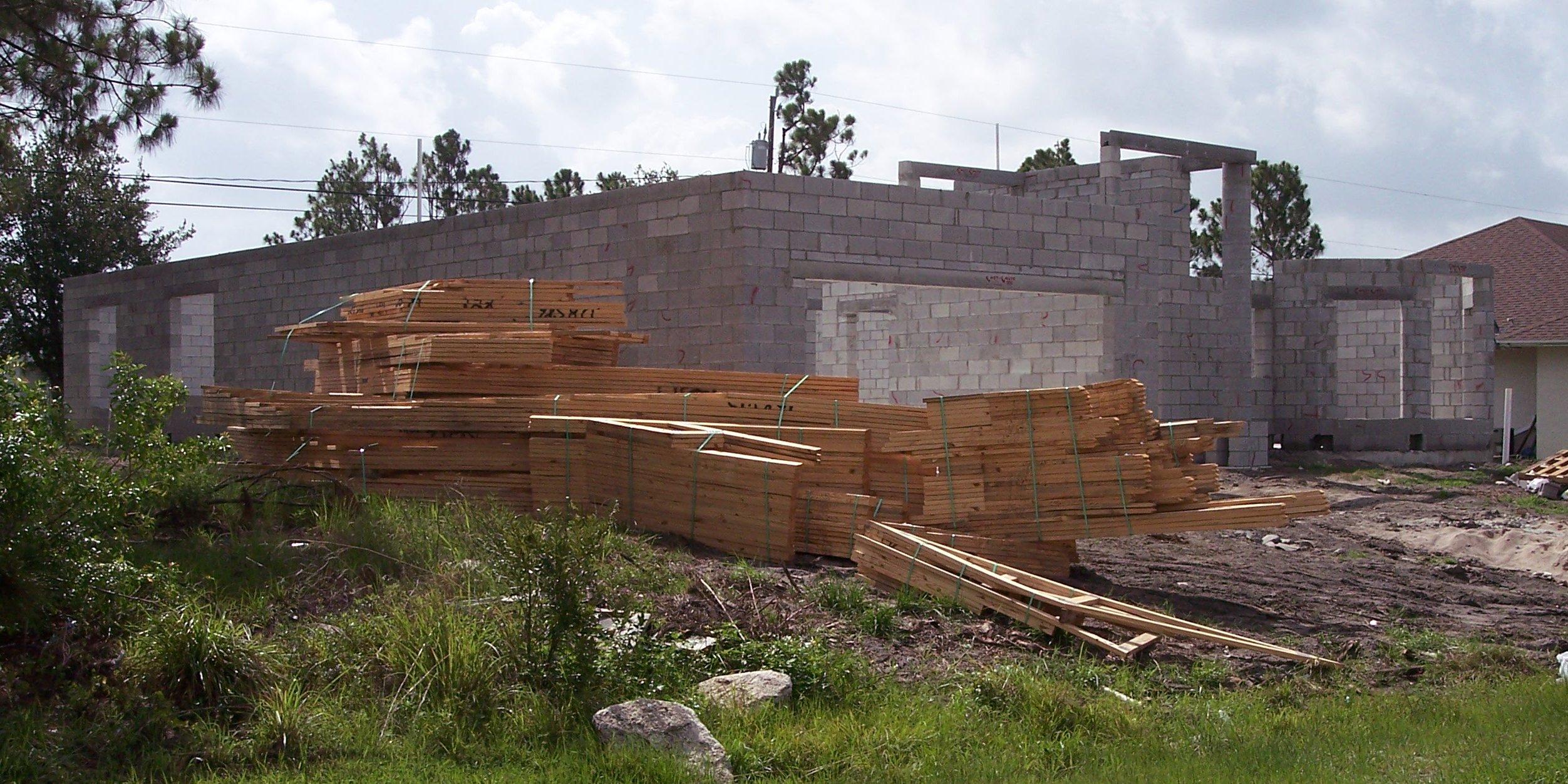 Example of large scale building materials being left
unprotected during the early stages of a construction site.
Credit: Rachel Boba and Roberto Santos

Patterns of repeat victimization for burglary at single-family house construction sites may not be obvious. Although a particular construction site might not be victimized repeatedly, a particular builder may be.[20] For example, a comprehensive study in Port St. Lucie, Florida found that although only 12 of 254 individual sites were burglarized twice, 20 percent of builders accounted for nearly 70 percent of burglaries.[21]

Property taken in construction site burglaries is rarely recovered.[22] However, the type of goods that are taken may indicate the motivations of the offender. Amateur opportunists may take generic building materials for use in their own houses, such as plywood, lumber, or ladders. Professional thieves may take property that can be sold in an unregulated second-hand market, such as ceramic tiles, faucets, toilets, doors, and windows.[23] Insiders may be more likely to take tools and small equipment or items that take some skill or effort to remove. 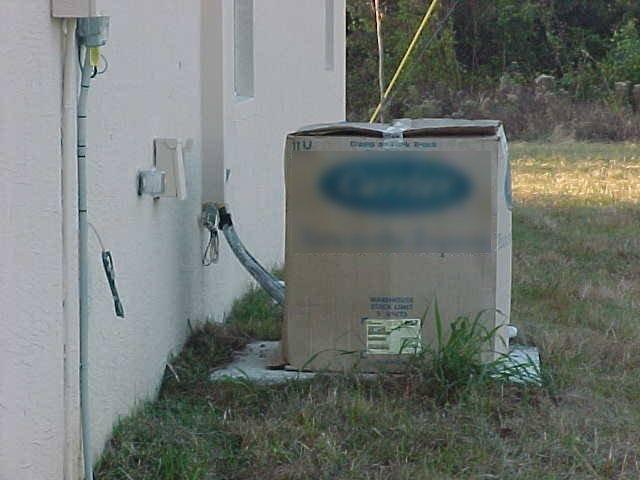 Unlike residential and commercial burglaries, there is little research that indicates when construction site burglaries predominantly occur. And in fact, because of the lack of guardianship and the large number of workers that frequent a site, it would seem that construction site burglaries could occur at any time of day and on any day of the week. However, analyzing local burglary data may allow you to determine whether burglars prefer a particular time or day, which in turn will allow you to develop responses tailored to your local circumstances.

Because there are typically no witnesses to these crimes, the exact time of occurrence may be difficult to determine. Thus, it can be helpful to analyze the length of time that the property was left as risk.

The time period after a house has lockable windows and doors but before the house is occupied is a particularly vulnerable construction stage, because a large number of desirable types of property (for example, washers, dryers, and refrigerators) are in the house during this time. Burglaries in subdivisions may occur more often during the early construction stages (such as after the laying of the foundation), but before the first residents start moving in because of the availability of desirable construction materials and the lack of guardianship. Once again, because there is no research on this topic, it is important to determine when houses under construction are most vulnerable within your community. Lastly, construction cycles and schedules vary considerably by region, due to factors such as weather and national and local economics. Anticipating booms in construction based on these factors may assist in identifying a potential problem or in determining if an existing problem will continue.