Responses to the Problem of Bullying in Schools

Your analysis of your local problem should give you a better understanding of, among other things, the extent of the problem, including the level of bullying and the identification of bullying hot spots, chronic victims and chronic offenders. Outlined below are approaches used to address bullying, along with information about their effectiveness.

General Requirements for an Effective Strategy To Counter Bullying in Schools

3. Using the "whole-school" approach.† Olweus developed and tested the whole-school approach in Scandinavia. It contains elements listed under requirement 1 and 2 above (school principal's involvement and the multi-faceted, comprehensive approach) and it has undergone repeated evaluations in other countries, including the United States, with a range of successful results, including a 50 percent reduction in bullying in 42 schools in one area of Norway. However, most other applications of this approach achieve improvements in the 20 to 30 percent range, which is significant.61 In some studies, the results are achieved primarily in the second year. This approach can reduce the level of bullying and other antisocial behavior, such as vandalism, fighting, theft, and truancy, and improve the "social climate," order and discipline in class.

† Some research refers to the wholeschool approach as the "schoolwide" approach or "organizational" approach. The three are identical, requiring interventions at the school, class and individual level.

The whole-school approach is somewhat easier to implement in elementary schools, due to their size and structure. Students in these schools generally interact with only one or two teachers a year, guaranteeing higher levels of consistent messages from teachers to students.62 However, significant gains can also be achieved in middle and high schools Research tells us that the whole-school approach requires renewed effort each year (reinforcing anti-bullying strategies with returning students, their parents and school staff), which may be at odds with a school's, or even a police department's, concern about tackling the latest hot topic. However, onetime efforts will be less effective. Thus, schools must prepare themselves to maintain momentum for anti-bullying initiatives year after year.
4. Increasing student reporting of bullying. To address the problem of students' resistance to reporting bullying, some schools have set up a bully hot line. One in England received thousands of calls shortly after it was established. Some schools use a "bully box"; students drop a note in the box to alert teachers and administrators about problem bullies. Other approaches to increase reporting are also used. In one Kentucky town, a police officer, keen to increase reporting, developed a short in-class segment titled "Hero vs. Snitch," in which he discussed why reporting is heroic behavior, not tattling.
5. Developing activities in less-supervised areas. In these areas (e.g., schoolyards, lunchrooms), trained supervisors spot bullying and initiate activities that limit opportunities for it. Such activities must be of interest to bullies and curb their behavior.
6. Reducing the amount of time students can spend less supervised. Since much bullying occurs during lesssupervised time (e.g., recess, lunch breaks, class changes), reducing the amount of time available to students can reduce the amount of bullying.
7. Staggering recess, lunch and/or class-release times. This approach minimizes the number of bullies and victims present at one time, so supervisors have less trouble spotting bullying. However, supervisors must be mindful that most bullies are in the same grade as their victims. 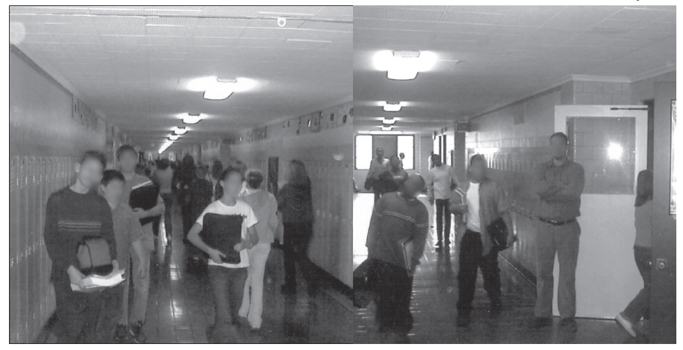 8. Monitoring areas where bullying can be expected (e.g., bathrooms). Adult monitoring can increase the risk that bullies get caught, but may require increased staffing or trained volunteers.
9. Assigning bullies to a particular location or to particular chores during release times. This approach separates bullies from their intended victims. Some teachers give bullies constructive tasks to occupy them during release times. Careful victim monitoring is required to ensure that bullies do not pick on victims at other times.
10. Posting classroom signs prohibiting bullying and listing the consequences for it. This puts would-be bullies on notice and outlines the risks they take. Teachers must consistently enforce the rules for them to have meaning. Schools should post signs in each classroom and apply ageappropriate penalties.
11. Providing teachers with effective classroom management training. To address bullying, schools should ensure that all their teachers have effective classroom management training. Since research suggests that classes containing students with behavioral, emotional or learning problems have more bullies and victims, teachers in those classes may require additional tailored training in spotting and handling bullying.
12. Having high-level school administrators inform late-enrolling students about the school's bullying policy. This removes any excuse new students have for bullying, and stresses the importance the school places on countering it.

13. Training students in conflict resolution and peer mediation. A number of schools adopt conflict resolution and peer mediation training to address bullying (and other) problems. "Because bullying involves harassment by powerful children of children with less power (rather than a conflict between peers of relatively equal status), common conflictresolution strategies or mediation may not be effective."64 In fact, they may actually further victimize a child.65 The training often offers too little for those students who really need it, and too much for those who already have the skills. The whole-school approach, in contrast, does not assume that students alone can solve the bullying problem; interventions at all levels are required: school, class, individual, teacher, parent, and peer.†

† In terms of peer mediation, one Flemish study found that elementary- and many middle school-age students lack confidence in successfully intervening (Stevens, Van Oost and De Bourdeaudhuij 2000). In another study, researchers found that only small numbers of students were willing to go to peer-support training, and that it was harder to get boys or male teachers involved (Naylor and Cowie 1999). In one study in Australia, however, Peterson and Rigby (1999) found a tremendous number of peer interventions, as part of a whole-school approach. The result was a modest decline in reported bullying of students in their first year of high school, but not in the other years. The authors still found this significant because the transition year into high school can be intense for bullying.

14. Adopting a "zero tolerance" policy. Some schools, in their rush to "do something" about bullying, adopt a "zero tolerance" policy against it, without an in-depth analysis of their specific problem or the comprehensive involvement of administrators, teachers, other staff, student-witnesses, parents, bullies, and victims at the school, class, and individual level. This approach may result in a high level of suspensions without full comprehension of how behavior needs to and can be changed. It does not solve the problem of the bully, who typically spends more unsupervised time in the home or community if suspended or expelled. Zero tolerance may also ultimately have a chilling effect on reporting of bullying.
15. Providing group therapy for bullies. Some schools provide self-esteem training for bullies. This may be misdirected: research suggests that most bullies do not lack in self-esteem.66
16. Encouraging victims to simply "stand up" to bullies. Without adequate support or adult involvement this strategy may be harmful and physically dangerous for a victim of bullying.67