The information provided above is only a generalized description of bicycle theft. You must combine the basic facts with a more specific understanding of your local problem. To enable you to design an effective response, you will likely need to analyze local data carefully.

Your local bicycle theft problem can take many forms, and you will need to determine the specific nature of the problem to produce an effective response. It may be limited to, or a combination of, thefts from in or around victims' homes; thefts from public spaces; or thefts from particular areas such as university campuses or transit hubs.

Knowledge of the location, facilities available, and types of bicycles stolen will aid in identifying conditions that might contribute to the problem. Clues as to how thieves steal bikes may be apparent from locks found at the scene of thefts, CCTV footage, and related offenses.

This knowledge can also help you identify who is committing the offenses, and why. For example, where the quantity of stolen cycles recovered is high, a high proportion of offenders are probably joyriders. Preventive efforts for such offenders will differ from those for offenders who sell bicycles on (acquisitive/volume offenders). Such analyses may be possible only if you systematically collect data (for example, it may be necessary to distinguish between burglaries in which bicycles are stolen and those in which they are not). Ensuring the systematic recording of bicycle thefts will allow for better analysis and subsequently better targeted responses to your local problem. Alternatively, you may need to collect or identify new data sources. For example, alongside observational research, consulting with bicycle theft victims may help to reveal specific problems that you would not otherwise identify.

In addition to criminal justice agencies, the following groups have an interest in the bicycle theft problem and should be considered for the contribution they might make to gathering information about the problem and responding to it:

The following are some critical questions you should ask when analyzing your particular bicycle theft problem, even if the answers are not always readily available. Your answers to these and other questions will help you define your local problem and choose the most appropriate set of responses later on.

The Nature of Bicycle Theft 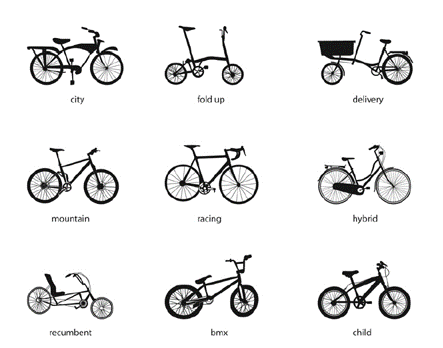 A typology of bicycles (www.bikeoff.org)

§ For example, at London's Walthamstow train station, secure cycle-parking facilities were installed on a site on the opposite side of the train track to the ticket office. This was accessible only via a bridge and resulted in commuters' continuing to flypark their bicycles to railings outside the ticket office entrance, with the new facility being underused.

§§ Zhang, Messner, and Liu (2007) found that in the Chinese city of Tianjin, people living in row houses were less likely to be bike theft victims than those living in apartment buildings.

Measurement allows you to determine to what degree your efforts have succeeded, and suggests how you might modify your responses if they are not producing the intended results. You should take measures of your problem before you implement responses, to determine how serious the problem is, and after you implement them, to determine whether they have been effective. All measures should be taken in both the target area and the surrounding area to provide you with control data against which to compare your intervention data. For more detailed guidance on measuring effectiveness, see the Problem-Solving Tools guide, Assessing Responses to Problems.

The types of measures considered will depend on the particular problem to be tackled and the type of intervention to be implemented. For example, if part of the aim of an intervention is to change cyclists' locking practices, then in addition to measuring what was implemented (process measures) and any changes in bike theft rates (outcome measures), a useful intermediate measure would be the degree to which cyclists' locking practices have changed as a result of intervention. If the locking practices do not change over time, then you cannot attribute any reduction in crime observed to locking practices. Only by measuring changes in this type of behavior would you be able to come to such conclusions and understand what it was that led to the (un)desired outcomes.

To measure potential success, you should establish the following measures.

Some types of intervention may encourage cycle retailers to report useful information, and so you should consider changes in information flow when relevant. Although there may be no legal duty for retailers to contact the police about damaged or stolen cycles, they may be able to provide a rich source of data concerning your local problem, including who is stealing the bicycles or why they may be targeting particular types of bike.

One potential problem with using crimes reported to the police as a measure of the effectiveness of interventions concerns the underreporting discussed earlier. For example, it is possible that following police intervention or a publicity campaign, victims will be more likely to report crimes to the police. On the one hand, this is a good thing and will facilitate a better understanding of the crime problem. On the other, it may create the illusion that bicycle theft has increased, when the reality may be that it has not (it may even have decreased). Instead, the intervention activity has led to an increase in victims' willingness and likelihood to report crimes to the police. Two ways of examining this issue are as follows: