Assaults in and Around Bars, 2nd Edition

The Problem of Assaults in and Around Bars

This guide deals with the problem of assaults in and around bars.§ We know a lot about the risk factors for these assaults, and about effective responses to them. We know less about which particular responses are most effective in addressing specific aspects of the problem. Therefore, your challenge will be to conduct a good analysis of the local problem, guided by the information presented here, and put together the right combination of responses to address that problem.

The proliferation of bars in many communities has led to increases in assaults in and around the bars. While many, if not most, of these are alcohol-related, assaults also occur when neither the aggressors nor the victims have been drinking. Most assaults occur on weekend nights. [1] The majority of assaults occur at a relatively small number of places. [2] §§ Not all assaults involve a simple fistfight with a clear beginning and ending; instead, the incidents are often more ambiguous and complicated. For example, some are intermittent conflicts that flare up over time, some evolve into different incidents, and many involve participants who alternate between the roles of aggressor and peacemaker, often drawing additional people into the incident. [3] Some involve lower levels of aggression (pushing, shoving), some involve more-severe violence (kicking, punching), and still others involve the use of weapons. Many of the injuries treated at hospitals, especially facial injuries, are related to assaults in and around bars.

§ The term "bar" refers to licensed liquor establishments that sell alcohol primarily for consumption on the premises. These include establishments variously known as nightclubs, pubs, taverns, lounges, hotels (in Australia), discotheques, or social clubs. The term "assault" refers to the full range of violent acts, from those that cause minor injury to those that cause death, and from consensual fights to unprovoked attacks.

§§ For example, in Sydney, Australia, just 12 percent of bars accounted for almost 60 percent of assaults occurring in licensed drinking establishments (Briscoe and Donnelly 2001b).

Those who fight in bars are not deterred by negative consequences (such as minor injuries, tension among friends, or trouble with the police), all of which tend to be delayed. The perceived rewards are more immediate and include feeling righteous about fighting for a worthy cause, increasing group cohesion among friends, getting attention, feeling powerful, and having entertaining stories to tell. [4] Although some assault victims do something to precipitate the assault, many do not. [5] Most are smaller than their attackers, are either alone or in a small group, and are drunk more often than their attackers. [6] Attackers target victims who appear drunker than themselves. [7]

Many assaults are not reported to the police by either bar staff or the victim. Bar owners have mixed incentives for reporting assaults to the police. On the one hand, they need police assistance to maintain orderly establishments, but on the other hand, they do not want official records to reflect negatively on their liquor licenses. Many fights and disputes that start inside a bar are forced outside by the staff so they do not appear to be connected with the bar. Victims often are drunk, are ashamed, and see themselves as partly responsible, and so do not report assaults. Other victims believe the incidents are too trivial to involve the police. [8] Thus police records do not reflect the total amount of violence in and around bars. However, we underestimate the seriousness of the problem if we believe these assaults are just excessive exuberance by young men or "just deserts" for drunken troublemakers.

In addition to generating police and community concerns for public safety, bar owners also bear the consequences of the problem in terms of damage to reputations, loss of future customers, staff reluctance to work, damage to property, reductions in profit, and, ultimately, potential loss of license. [9]

Assault is only one of many alcohol-and bar-related problems the police must address. Some of these issues are covered in other guides in this series. These related problems require their own analyses and responses:

Factors Contributing to Violence and Aggression in Bars

Understanding the factors that are known to contribute to your problem will help you frame your own local analysis questions, determine good effectiveness measures, recognize key intervention points, and select an appropriate set of responses for your particular problem.

Drinking alcohol is the most obvious factor contributing to aggression and violence in bars, but the relationship is not as simple as it might seem. Alcohol contributes to violence by limiting drinkers' perceived options during a conflict, heightening their emotionality, increasing their willingness to take risks, reducing their fear of sanctions, and impairing their ability to talk their way out of trouble. [10] Many of the alcohol problems police deal with can be attributed to ordinary drinkers who go on binges, drink more than they usually do, or drink on an empty stomach. In general, those who drink excessively are more aggressive and also get injured more seriously than those who drink moderately or not at all. [11] Moderate drinkers do not appear to be at significantly higher risk of injury than nondrinkers.

Cultures that are more accepting of intoxication as an excuse for antisocial or aggressive behavior, and that relax the normal rules of society during drinking time, have higher levels of aggression and violence in and around bars. [12] This tolerance for intoxication is often reflected in a society's laws related to legal defenses to crimes, and to the regulation of drinking and the alcohol industry. In some peer groups, intoxication is an accepted excuse for aggression and violence. [13]

The evidence on the effect of bar concentration is mixed. Some bars attract crime, while others are merely affected by crime in the surrounding neighborhood. Blocks with bars have higher levels of reported crime than blocks with no bars. [15] High concentrations of bars can increase barhopping, and if all bars close at the same time, the risks of conflicts on the street increase. But the mere fact that a neighborhood has a high concentration of bars does not necessarily mean there will be higher crime levels in the area. [16]

Bars' hours of operation contribute to the risk of violence in different ways. When all bars in a given area close at the same time, and large numbers of patrons exit simultaneously, crowds may linger on the sidewalk to wait for transportation or to order food from late-night restaurants, and competition for these services can precipitate assaults. Moreover, large groups of patrons from incompatible social groups might come together, creating conflict. [17]

Uniform mandatory closing hours also encourage some patrons to drink heavily just before closing, knowing they cannot legally buy another drink for the rest of the night. It is generally the case that bars with later closing hours experience more assaults than those with standard business hours, although additional research on the effects of later or staggered bar closing times is needed. [18]

Some security staff see themselves as enforcers, rather than as protectors of customers' safety. [19] The more aggressively the security staff handles patrons, the more aggressively patrons respond. Many security employees and bouncers lack the skills to defuse violence. The presence of large, muscular men dressed in black, which is not uncommon for security staff, encourages confrontations with some patrons, while discouraging them with others. Bouncers' very presence may subconsciously signal to some patrons that physical confrontation is an acceptable way to resolve disputes in that bar. Bouncers are implicated (whether justifiably so or not) in a significant proportion of assaults. [20] However, victims of aggression by security staff may be hesitant to report the assault for several reasons: they may not have an accurate description of the bouncer involved, they may fear retaliation and being banned from the bar, or they may not want their own actions to be scrutinized. [21]

The overwhelming majority of attackers and victims are young men (18 to 29 years old). Many young men gather and drink alcohol to establish machismo, bond with one another, and compete for women's attention. [22] Many incidents of bar aggression start when young men challenge one another. [23] This is more likely to happen when they do not know each other. Overall, women's presence has a calming effect on men's behavior in crowded bars. [24]

Drinkers report that the most common reaction to their drunkenness in bars is continued alcohol service. [25] In part, this occurs because staff have difficulty determining whether patrons are drunk, particularly when customers obtain drinks from several sources within the bar (e.g., bartenders, waitresses, and "shot girls"). [26] Determining whether patrons are drunk is more difficult in overcrowded bars, as servers are under pressure to serve customers quickly. In addition, crowded venues are noisy, making it difficult for servers to hear verbal cues that would suggest drunkenness. [27] Refusing service to drunken patrons often makes them angry. Bartenders and wait staff who do not want this aggression directed at them, and who also may not want to risk losing tips, often continue to serve obviously drunken patrons.

Crowding and Lack of Comfort

Poor ventilation, high noise levels, and lack of seating make bars uncomfortable. This discomfort increases the risks of aggression and violence. [28] Crowding around the bar, in restrooms, on dance floors, around pool tables, and near phones creates the risk of accidental bumping and irritation, which can also start fights. [29] 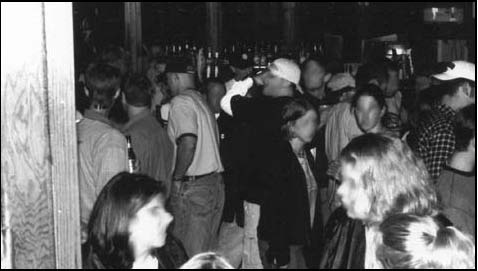 Crowding in bars creates the risk of accidental bumping and irritation, which can lead to assaults. Credit: Kip Kellogg

The high emotions that arise during competition in bars—whether patrons are watching sporting events on television or competing themselves in pool, darts, or other typical bar games—can turn to anger and frustration. [30] Competitive drinking contests (e.g., "chugging" beer or rolling dice for drinks) contribute to excessive drinking. Sports bars may foster a "macho" atmosphere and may contribute to customers' sense that aggression is an acceptable part of the social setting. [31] Competition outside the bar—for food service, public transportation, walking space, women's attention, and so forth—can similarly trigger violence.

Low Ratio of Staff to Patrons

Inadequate staffing increases the competition for service and the frustration of patrons, and reduces opportunities for staff to monitor excessive drinking and aggression. [32]

Entertained crowds are less hostile. Quality music (as defined by the patrons) is more important than the music's noise level. [33] §

§ Newspaper articles and reports from some police agencies suggest that certain forms of music, such as hip-hop, attract aggressive and violent crowds, but it is unlikely that the musical form itself generates aggression, at least not directly.

Recognizing that attractiveness is highly subjective, obviously unattractive, poorly maintained, and dimly lit bars signal to patrons that the owners and managers have similarly low standards for behavior, and that they will likely tolerate aggression and violence. [34]

If the bar staff tolerates profanity and other disorderly conduct, it suggests to patrons that the staff will tolerate aggression and violence, as well. [35]

Patrons can use bottles, glasses, pool cues, heavy ashtrays, and bar furniture as weapons. The more available and dangerous these items are, the more likely they will cause serious injury during fights and assaults.

Low levels of liquor-law enforcement and regulation reduce owners' and managers' incentives to adopt responsible practices.§ We do not know for certain what effect the deployment of off-duty police officers in and around bars has on assault rates.

§ Some police departments discourage or prohibit uniformed patrol officers from inspecting bars, while other departments encourage it and make it a key element of their efforts to control problems in and around bars. The Charlotte-Mecklenburg (North Carolina) Police Department successfully lobbied for legislative changes to allow police officers to inspect licensed premises.

Assaults in and Around Bars, 2nd Ed.