The Problem of Witness Intimidation

Witness intimidation is but one aspect of the larger set of problems related to protecting crime victims and witnesses from further harm. Related problems not directly addressed in this guide, each of which require separate analysis, include:

Some of these related crime problems are covered in other guides in this series, all of which are listed at the end of this guide.

Although the problem of witness intimidation has special significance for prosecutors, it also has important implications for police. This guide focuses on the issues and responses that are most relevant to police, although useful resources for prosecutors are highlighted where appropriate.

Citizens who witness or are victimized by crime are sometimes reluctant to report incidents to police or to assist in the prosecution of offenders.§ Such reluctance may be in response to a perceived or actual threat of retaliation by the offender or his or her associates, or may be the result of more generalized community norms that discourage residents from cooperating with police and prosecutors.§§ In some communities, close ties between witnesses, offenders, and their families and friends may also deter witnesses from cooperating; these relationships can provide a vitally important context for understanding witness intimidation. Particularly in violent and gang-related crime, the same individual may, at different times, be a victim, a witness, and an offender.[2] Historically, witness intimidation is most closely associated with organized crime and domestic violence, but has recently thwarted efforts to investigate and prosecute drug, gang, violent, and other types of crime.

§ In this guide, the term "witness" is used to refer both to victims and to bystanders who could provide information to police. The term "victim" is used to denote the victim of the initial crime.

§§ Witnesses refuse to cooperate with police for reasons that are not related to intimidation. For example, a general lack of trust in the police may deter some witnesses from cooperating. In addition, research has shown that a desire for privacy, a desire to protect the offender from criminal prosecution, emotional attachments, economic dependence, or a desire to protect children may also deter victims of domestic violence from cooperating with police (Felson et al. 2002).

Witness intimidation takes many forms, including:

Threats are much more common than actual physical violence and are in fact just as effective in deterring cooperation.[3] Although some witnesses experience a single incident of intimidation, intimidation may also involve an escalating series of threats and actions that become more violent over time.[4] Other witnesses do not experience intimidation directly, but rather believe that retaliation will occur if they cooperate with police. Either way, they are deterred from offering relevant information that might assist police and prosecutors.

Particularly in communities dominated by gang and drug-related crime, residents have seen firsthand that offenders are capable of violence and brutality. Many also believe that offenders will return to the community after relatively brief periods of incarceration or will be able to arrange for intimidation by others while they themselves are incarcerated. The experience of violence in the community lends credibility to threats and creates a general sense of fear that discourages cooperation with police. 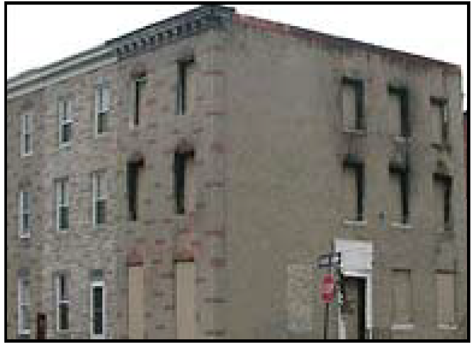 A fire set at this house in Baltimore killed a family of seven in 2002, drawing national attention to the problem of witness intimidation. Credit: National Public Radio

§ Drive-by shootings and other acts of blatant violence promote fear among residents, as do actions specifically warning residents not to cooperate with police. In 2004, gang members from Baltimore, Maryland appeared in a DVD entitled Stop Snitching, in which they threaten harm to those who cooperate with police. Stop Snitching tee shirts have also appeared in retail outlets nationwide (Butterfield 2005).

The prevalence of witness intimidation is difficult to quantify for many reasons. First, crime is underreported based upon a number of factors that have nothing to do with witness intimidation.§§ Second, where intimidation is successful, victims and witnesses report neither the initial crime nor the intimidation.[6] Third, although victimization surveys and interviews with witnesses whose cases go to court are helpful, they capture only a subset of the larger population of witnesses. They do not provide information on the experiences of the many witnesses who drop out of the process before a suspect is charged or a case goes to court.[7] Finally, there has been no empirical research on the scope or specific characteristics of community-wide intimidation.

§§ In 2004, only 50 percent of violent crimes and 39 percent of property crimes were reported to police; however, only a very small portion of victims surveyed indicated that intimidation was the reason they did not report the crime. Most often, victims did not report crime because they believed that the incident was too trivial to involve police or that the matter was personal (Karmen 2004; Catalano 2005).

Understanding the factors that contribute to the problem of witness intimidation will help to frame local analysis, to determine good effectiveness measures, to recognize key intervention points, and to select appropriate responses.

Intimidation is usually perpetrated by those involved in the original offense, although the original offender's friends, family members, and criminal associates may also threaten or harm witnesses.[14] In gang-related crimes, friends, family members, and associates may be more likely to threaten and intimidate witnesses.[15] In addition to gang and drug-related crimes, intimidation is particularly prevalent in cases involving domestic violence, bias crime, harassment, and sex offenses.[16] In contrast, cases involving property crime, such as burglary or car theft, are rarely affected by intimidation.[17]

Although intimidation is a key feature of gang and drug-related violence, the offenders are not necessarily aligned with nationally affiliated gangs or large drug operations; members of loosely affiliated gangs and local dealers may also protect their interests through intimidation.[18] Surveys suggest that offenders with a sophisticated understanding of the criminal justice system may be less willing to engage directly in intimidation and will either refrain from attempting to intimidate witnesses or will permit others to intimidate witnesses on their behalf.[19]

Victims of intimidation are not a homogeneous group. Although all citizens who agree to serve as witnesses need to be protected from reprisals, their vulnerability depends largely upon circumstance and may therefore change over time. Further, intimidation is not evenly distributed socially or geographically. People in certain locations—inner cities, densely populated areas, and communities where social cooperation is poor—are more likely to suffer intimidation than are others.[20] The characteristics of those likely to be victims of intimidation cluster around several criteria, many of which appear to be interdependent.

Many witnesses are intimidated long before they are asked to appear in court, most often by a community norm that discourages residents from cooperating with police. Most explicit acts of intimidation take place where police exert little control: at the witness's home, while the witness is at school or at work, or while the witness is running errands or socializing in the neighborhood.[28] However, witnesses also report being intimidated at the scene of the crime, while at the police station making a statement or identifying a suspect, and sometimes while in the courthouse waiting to testify; some even report being intimidated while on the witness stand. The time between a suspect's arrest and trial is the most dangerous; repeated and lengthy trial delays expand the opportunities available to a motivated intimidator.[29]

Offenders attempt to intimidate victims and witnesses for a number of reasons. Gang members use intimidation to subdue challenges to their authority or to reclaim lost gang status.[30] Gang members and other offenders use intimidation to avoid detection by police and to avoid conviction once they are arrested. Compared to the penalties for violent crime, penalties for intimidation are relatively light. As a result, offenders may feel they have little to lose and much to gain by avoiding conviction through intimidation.[31] Finally, the use and increasing sophistication of DNA and other forensic testing mean that deterring witness cooperation may be one of the only ways left available to weaken the prosecution's case.[32]