The Problem of Underage Drinking

This guide begins by describing the problem of underage drinking†, and reviewing factors that contribute to it. It then identifies a series of questions to help you analyze your local underage drinking problem. Finally, it reviews responses to the problem, and what is known about them from evaluative research and police practice.

† There are many labels used to describe underage drinking and its negative consequences. These include "binge drinking," "high-risk drinking," "heaving drinking," and "risky drinking," among others. Controversy about proper terminology comes from disagreement about how to quantify the amount of alcohol consumed and the time period in which it is consumed, and to what extent these measurements account for physical characteristics of the drinker (e.g., weight, gender) that are related to the effects of alcohol.

Young people use alcohol more than any other drug, including tobacco.1 Underage drinking—that is, drinking under the age of 21—is prohibited throughout the United States. Despite a historical lack of vigorous enforcement, minimum-drinking-age laws have been very effective in reducing many of the harms associated with underage drinking,2 such as traffic fatalities and alcohol-related injuries, as well as assaults and other crimes. There is significant potential for further harm reduction if additional strategies targeting the factors underlying the problem are implemented.‡

‡ There are several national efforts to combat the problem: see the Office of Juvenile Justice and Delinquency Prevention's "Enforcing the Underage Drinking Laws" program (www.ncjrs.org/html/ojjdp/compendium/2001/contents.html), [PDF] the Pacific Institute of Research and Evaluation website (www.udetc.org), and the Robert Wood Johnson Foundation's "A Matter of Degree" program designed to discourage drinking on college campuses(www.ama-assn.org/ama/pub/category/3558.html).

Virtually all high school students and most college students are under 21. However, most drink alcohol at least occasionally, and many drink frequently and heavily.§ They can get alcohol for free or at low prices, which contributes to their drinking at levels that significantly increase their risk of negative alcohol-related consequences.3 The proportion of underage youth who drink has not changed significantly over the past decade in the United States.4 Indeed, if anything, they are starting to drink at a younger age, and their drinking patterns are becoming more extreme.5

Young drinkers report a range of negative effects from alcohol, all of which can lead to troubled interactions with others, particularly police officers or other responsible adults who try to intervene.6 These include the following:

These effects often lead young drinkers to come into contact with police, either as offenders or as victims. Youths who drink heavily are more likely to carry handguns than those who do not drink.7 Alcohol use contributes to property damage, rape, and other violent crime on college campuses,8 and about half of college crime victims have been drinking before the crime occurs.9 A significant proportion of young drivers killed in car accidents are intoxicated when the crash occurs.10 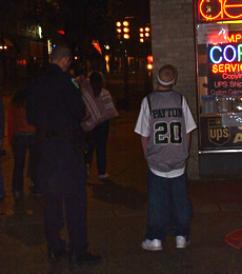 Despite widespread use, relatively few underage drinkers experience any legal or school-based consequences for their behavior. Credit: David Corbett

Further, underage college students who drink heavily are more likely to miss class, fall behind in school, sustain an injury, have unplanned or unprotected sex, drive after drinking, or have contact with campus police.11, † Students also experience "secondhand" effects of others' alcohol misuse, such as having their sleep or study time interrupted; having to take care of an intoxicated friend; being insulted or humiliated by drinkers; receiving unwanted sexual advances; getting in serious arguments; having their personal property damaged; being assaulted, sexually or otherwise; and being raped by an acquaintance.12 There are also a number of physical and mental health-related consequences of alcohol use, which are detailed elsewhere.‡

† While a number of studies reveal a correlation between alcohol consumption and negative or high-risk behavior (e.g., violent behavior, unprotected sexual activity), this relationship does not necessarily mean that alcohol causes these behaviors. Instead, there may be situational or personality factors underlying both the drinking and the high-risk behavior. For more information, see Gottfredson and Hirschi (1990).

Very few college students experience any college-based disciplinary action as a result of their drinking, despite widespread use and serious consequences for the individuals, their peers, and their communities.13 The past decade has witnessed increased concern about and creativity in confronting the issue, and both adults and youths support measures to prevent underage drinking. Given the issue's complexity, it is important to understand how the problem takes shape in your community. Analyzing the factors that contribute to your local underage drinking problem will help you to select the most effective responses.

Underage drinking is associated with a number of other problems not directly addressed in this guide, but many are covered in other guides in this series. These related problems require their own analyses and responses:

Some researchers have found that drinking, particularly among underage college students, "is often so routine that people find it difficult to explain why they do it."14 However, there are several common themes that appear to underlie underage drinking. Many see drinking as a "rite of passage," or a fundamental part of adolescence and college life. Young people develop beliefs about the acceptability of underage drinking from their peers, parents, and other agents of informal social control.15 Many young people believe that drinking will make it easier to be part of a group, reduce tension, relieve stress, help them to forget their worries, increase their sexual attractiveness, or make them more socially confident.16 People who attribute such benefits to alcohol are more likely to drink than people who believe drinking has more negative consequences (e.g., loss of control, legal troubles, health problems).17

Young people often go out intending to get drunk, and may try to intensify their drunkenness by drinking a lot very quickly or drinking especially strong liquor. However, many young people unintentionally get drunk when they misjudge their limits.18

Many young people do not drink at all, or drink at minimal levels. Their decision not to drink or to drink in moderation appears to result from a combination of factors:19

In addition, much research suggests that young people—college students in particular—drink because they assume everyone else does.20 Students consistently overestimate the amount that other students drink and the proportion of their fellow students who are heavy drinkers.21 Given that adolescents and young adults are susceptible to peer pressure and want to conform, it is likely that their perceptions of others' alcohol use influence their own drinking, whether or not their perceptions are correct.

Underage drinking occurs in an environment saturated by alcohol advertising on television, on billboards, at sporting and music events, and in national and local newspapers. The alcohol industry spends far more to promote its products than is spent on public messages encouraging responsible drinking.22 This media saturation may promote, facilitate, and perpetuate heavy drinking among young people. In addition, many products (e.g., alcopops, wine coolers) have hip, colorful, youth-oriented packaging and are likely to appeal mainly to young people.

In addition, young people, particularly those in college, are surrounded by outlets (e.g., grocery and convenience stores) that sell alcohol to be consumed elsewhere, or "off premises," as well as "on-premises" outlets such as bars and restaurants. High concentrations of alcohol outlets are associated with higher rates of heavy drinking and drinking-related problems among college students.23

Drink specials encourage heavy drinking among all customers, some of whom may be underage. Credit: David Corbett

Alcohol outlets and advertisers team up to provide an additional incentive for underage drinking: price promotions and drink specials. In general, lower prices result in higher consumption levels across all age levels.24 Price promotions offer discounts for high-volume purchases, such as kegs and cases of beer. College campuses near retailers that sell large volumes of low-price alcohol have higher rates of binge drinking than those campuses near outlets that do not sell discount alcohol.25

Many bars and restaurants have discount prices (e.g., during happy hour) and drink specials (e.g., two for one, ladies drink free) that encourage heavy drinking among all customers, some of whom may be underage.

Many high school and college students say that they attend parties or go out drinking because "there is nothing else to do." Like older adults, adolescents and young adults enjoy socializing and need a variety of avenues to interact with peers, make new friends, and pursue romantic relationships. In the absence of alcohol-free places to socialize, young people go to parties where alcohol is present, and may succumb to peer pressure to drink.

Underage drinkers obtain alcohol from two main sources: third parties, such as legal-age friends, siblings, and strangers; and commercial outlets, such as stores, bars, and restaurants (often by using a fake ID).26

Home is the primary source of alcohol among the youngest drinkers.27 Some youth take alcohol from their parents' liquor cabinets without their parents' knowledge. Some parents supply their underage children with alcohol at special events such as graduations, weddings, or holiday parties.

Underage drinkers sometimes ask strangers to buy alcohol for them, often in exchange for a fee or a portion of the alcohol purchased. This practice is called "shoulder tapping"—underage youth wait outside a store and tap a stranger on the shoulder to make the request.28

Most underage drinkers report it is "very easy" to obtain alcohol; about one in four underage college students report that they can buy alcohol without age verification, or with a fake ID.29 Studies of alcohol purchases across the country reveal that, depending on the location and the environmental context, 40 to 90 percent of retail outlets have sold alcohol to underage buyers.30

In some cases, retailers do not ask for ID. In others, underage drinkers present an ID card that has been altered to indicate they are of legal drinking age, or an ID card that belongs to someone who is of legal drinking age. The underage drinker may resemble the person in the photograph, or may substitute his or her own picture and relaminate the card. People can purchase fake IDs on the Internet, buy them directly from counterfeiters, or use fraudulent documents to get a driver's license. Recent advancements in technology have made the counterfeiting of state-issued ID cards easier, using a scanner and a color printer.31 Use of fake IDs is more common in urban areas and in states without consistent enforcement of underage purchase laws.32 Furthermore, young people are more likely to obtain and use a fake ID if they think their peers support the practice.33

Underage people drink at a variety of locations, including the following:

Spring break is a college ritual associated with excessive drinking and other high-risk, extreme behavior. One study of students visiting a Florida beach community during spring break found that 75 percent of the males reported being intoxicated at least once per day, while 40 percent of females reported the same.39 More than 50 percent of the men and more than 40 percent of the women reported drinking until they got sick or until they passed out at least once during the weeklong period. Given that people usually vomit when their body's blood alcohol content (BAC) reaches approximately 0.16, and lose consciousness at a BAC of approximately 0.30, it is clear that many students on spring break are drinking at unsafe levels.40

In addition, high school and college students often play any of hundreds of drinking games.41 These games encourage heavy drinking, and the resulting inability to follow game rules leads to even more drinking.