Responses to the Problem of Traffic Congestion Around Schools

General Considerations for an Effective Strategy

The following response strategies provide a foundation of ideas for addressing your particular problem. These strategies are drawn from a variety of research studies and police reports. Several of these strategies may apply to your community's problem. It is critical that you tailor responses to local circumstances, and that you can justify each response based on reliable analysis. In most cases, an effective strategy will involve implementing several different responses. Law enforcement responses alone are seldom effective in reducing or solving the problem. Do not limit yourself to considering what police can do: carefully consider whether others in your community share responsibility for the problem and can help police better respond to it. The responsibility of responding, in some cases, may need to be shifted toward those who have the capacity to implement more effective responses. This is particularly true in the case of school congestion problems, as solutions typically rely on the leadership and cooperation of school staff, teachers, students, and parents. (For more detailed information on shifting and sharing responsibility, see Response Guide No. 3, Shifting and Sharing Responsibility for Public Safety Problems).

Many responses to the problem of school traffic congestion are designed to reduce the number of children taken to school in private vehicles. These efforts are often presented as environmentally friendly programs that increase physical activity among children, resulting in benefits far beyond that of reduced traffic congestion. With any of these programs designed to change parents' and students' behavior, incentives for participating as well as changes designed to make it easier to participate can go a long way toward achieving congestion reductions. Marin County, California, for example, implemented many of the responses described below to encourage children to walk or bike to school, and experienced a 50 percent increase in the number of children walking and biking and a corresponding decrease of 29 percent in car traffic around the school.18 Similar results have been achieved in Boston and Minnesota 19, as well as in jurisdictions throughout the United Kingdom20 and Canada.21

1. Educating parents. You can educate parents about their childrens using alternative transportation modes to and from school, as well as the dangers and legal consequences of traffic violations, and ways that parents play a role in reducing congestion and increasing student safety by following the rules of the road. You can provide such information in the PTA newsletter or distribute it in fliers handed to parents while they are waiting in school drop-off and pick-up zones.
2. Encouraging students to walk or bike to school. You could encourage students to walk or bike to school if the school curriculum integrates the health and environmental benefits of walking or biking to school into the school curriculum (e.g., encouraging pupils to consider the impact of different transportation choices on the environment as well as their own physical health). You can enhance such programs by enabling students to earn points and/or rewards based on how frequently they walk or bike to school.
3. Encouraging carpooling. Likewise, parents would have an added incentive to carpool if you created a special express carpool lane, enabling participating drivers to get in and out of the school area—and on to their jobs or errands—faster. 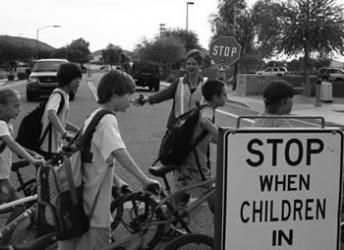 Programs such as "Safe Routes to School" employ tactics such as adding crosswalks and crossing guards and encouraging parents to have their children walk or bike to school. Credit: City of Glendale, Arizona

4. Mapping out safe pedestrian routes. One such program is called Safe Routes to School, which is designed to "improve children's health and that of the overall community by making walking and bicycling to school safer and easier." This is achieved by mapping out the safest ways (e.g., those that avoid busy intersections and use sidewalks) that children can travel by bike or walk to and from school, adding crosswalks and crossing guards, and encouraging parents to have their children walk or bike to school. Most local police agencies have basic computerized mapping capabilities that they could use for this purpose. The citys or countys planning department can often provide an alternative source of mapping expertise.
5. Implementing a "walking school bus" program. Under such programs, a route is identified similar to a bus route, but also selected with pedestrian safety in mind. Parents are recruited to "drive" the bus, walking along the predetermined route to pick up children who are registered by their parents to "ride" the bus and escort them by foot to the school. Student sashes, school bag tags, and bus stop signs are often used as part of the program, as are backpacks and lockers to make it easier for children to walk without having to haul a large volume of books and school supplies with them. Naturally, such programs work only in neighborhoods that are near (i.e., in walking distance) of the school.

Similar to walking buses, cycle trains entail a group of parents and pupils cycling to school together. Safe biking routes are mapped out in advance, and school bags and lunch boxes are transported in a bike trailer pulled by a parent volunteer. Any biking program should include the installation of lockers or other ways to accommodate and secure the anticipated increase in bikes on school property.

6. Instituting school busing. While this option is typically viewed as cost-prohibitive, using buses or minivans to transport children to school is nonetheless an effective means of reducing the number of children taken to school by car, as well as the congestion that accompanies that transportation mode. Instituting a busing program, however, must involve a consideration of when and where buses will load and unload. Otherwise, buses could end up contributing to a congestion problem rather than reducing it. Moreover, before initiating a new busing system, it may be useful to survey parents to confirm that they would use it.

The source of many congestion problems stems from poorly planned drop-off and pick-up procedures, as well as parking-related physical design characteristics. Altering these rules and design characteristics can often resolve congestion issues with little impact to parents' and students' daily routines. In Plano, Texas, measures to reroute traffic through the designation of one-way streets, the synchronization of street traffic lights with school dismissal times, additional signs, and other physical design measures resulted in increases in traffic flow and a reduction in crashes around the school.22 In the Phoenix school system, implementing a school safety program that included changes to drop-off and pick-up procedures reduced congestion and yielded significant improvements to school safety across the state.§

7. Altering drop-off and pick-up rules. You can reduce congestion considerably by altering the times during which parents can drop off or pick up their children. or by staggering bell times. However, parents who have multiple children at the same school, yet different drop-off and pick-up times, may discourage these changes. A related change would be to change or add drop-off and pick-up locations, encouraging alternative routes into and out of the school area so that drivers would not all congregate in one place. Instituting "valets" at drop-off locations, whereby school staff or volunteers escort children from car to school, can also expedite the drop-off process. You should implement any change in drop-off and pick-up procedures at the start of the school term to eliminate confusion, accompanied by clear and detailed written instructions.
8. Strategically funneling traffic. You can minimize some types of congestion problems by directing different types of traffic to different locations on and around the school property. For example, you could locate staff parking behind the building, while buses pick up and drop off in one area and parents drop off and pick up their children in another area. These measures, however, are often not available to schools that do not have multiple areas serving these purposes, as well as those that have outgrown the neighborhoods in which they are located and therefore have little extra space to dedicate to strategic funneling. Indeed, in some situations, even if space were available to create new entry, exit, and parking locations, area residents might object to the reduction of green space caused by those changes.
9. Establishing curbing and parking zones. Using curbing and signs to extend drop-off and pick-up zones may reduce congestion at the immediate school site. Creating additional temporary parking areas along with safe pedestrian routes from those areas to the school can also have an impact. Such pedestrian routes might involve creating new crosswalks and/or using a crossing guard. In addition, you could create no-parking zones to restrict street parking that might be adding to congestion and restricting student pedestrians' visibility.
10. Rerouting street networks. Often the simplest solution to the school congestion problem is to reroute streets to force drivers to seek alternative routes to and from the school. This is usually accomplished by creating one-way streets or erecting "no entry" signs on certain streets leading to the school, which might be in effect only during peak drop-off and pick-up hours.
11. Synchronizing traffic lights. One simple approach to reducing school congestion is to examine traffic lights' existing timing and to revise the lights' timing to synchronize with school start and dismissal times. This measure naturally requires coordinating with your local traffic authority, and may not have an impact if the lights' timing is not a source of the congestion problem to begin with.

12. Enhancing the enforcement of existing traffic laws. As with similar, more "reactive" police measures, such as increased patrols, enhanced enforcement of existing traffic laws is likely to have a positive but short-term impact on the problem. As soon as traffic enforcement reverts back to preintervention levels, congestion is likely to increase again.§ However, if patrols are assigned strategically to increase presence during peak arrival and departure periods, they may serve as a very useful and effective complement to other problem-solving measures.

§ See Response Guide No. 1, The Benefits and Consequences of Police Crackdowns, for further information on how intensive enforcement works.