Thefts of and from Cars on Residential Streets and Driveways

This guide begins by describing the problem of theft of and from cars in residential neighborhoods and by reviewing factors that increase its risks. It then identifies a series of questions to help you analyze your local problem. Finally, it reviews responses to the problem and what is known about these from evaluative research and police practice.

Theft of and from cars in residential neighborhoods is only one of a number of vehicle-related problems that occur in residential neighborhoods that the police must address. This guide is limited to addressing only the harms created by theft of and from cars in streets and driveways in such neighborhoods. It does not cover thefts in parking facilities, except where especially relevant. Related problems not directly addressed in this guide, each of which require separate analysis, include: 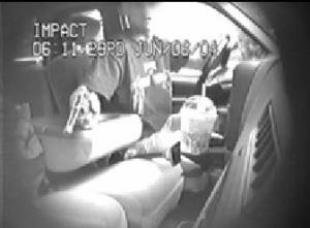 Not all car thieves are non-violent criminals. Stolen cars are used as tools to facilitated other crimes such as drug trafficking or as "getaway" vehicles in robberies or burglaries. www.baitcar.com

§ As many as 10 percent of all reported thefts of automobiles are fraudulent. Vehicle owners may stage a phony theft of their vehicle because they are no longer able or willing to make the required vehicle loan payments, or in order to defraud their insurance carrier for financial gain. Consequently, at least some portion of what is perceived to be a vehicle crime problem might in fact be an insurance fraud problem (Arizona Criminal Justice Commission, Statistical Analysis Center, 2004).

Theft from parked cars§ is one of the most common complaints received by police in residential neighborhoods. According to U.S. Department of Justice statistics, these types of crimes make up some 36 percent of all larcenies reported to the police. Crimes in general and property crimes in particular tend to be underreported to authorities. As a result, the problem may be worse than it appears in statistics reported by police. In the United Kingdom, a nationwide survey found that only 47 percent of all car crime was reported to the police. In contrast, nearly all thefts of cars are reported to the authorities, because of the significant monetary loss and insurance company reporting requirements.

§ Thefts from vehicles are variously referred to by police around the country as "vehicle burglaries," "vehicle larcenies," "car cloutings" (St. Louis), and "car prowls."

Thefts from vehicles usually involve small dollar values in terms of the property stolen, but they take up considerable police resources and increase residents' fear of crime. These thefts excepted, crime rates in suburban residential neighborhoods are otherwise low. However, recurring thefts from cars in a residential community can erode residents' feelings of safety and security, as well as their confidence in police and other authorities.

While generally a more significant problem in metropolitan areas, thefts of cars also pose a significant crime problem in many suburban jurisdictions. Cars are generally stolen for one of three purposes: (1) for temporary transportation, such as use in another crime or for "joyriding"; (2) to strip the car of its valuable parts for resale; (3) to re-sell it, often disguised as a legitimate car. The vast majority of car thefts are committed for transportation or "joyriding." 1 Stolen cars generate higher insurance costs, inconvenience, and financial losses for car owners as well as the risks to the safety of police officers and other motorists from stolen vehicle pursuits.

Understanding the factors that contribute to your problem will help you frame your own local analysis questions, determine proper effectiveness measures, recognize key intervention points, and select appropriate responses. Where and when cars are parked are probably the most significant factors that offer opportunity to thieves.

At single-family residences. Because suburban residential areas are relatively safe and quiet, residents can become complacent about car security. They may leave their car doors unlocked or the keys in the ignition. Oftentimes, their homes' exterior lighting is wholly inadequate. Overly tall shrubbery and other brush on the premises can provide thieves with cover. An entire neighborhood filled with unlocked cars and poorly lit homes, with plenty of cover, is an inviting scene for a thief.

On the street. National Crime Survey data indicate that most car thefts (37 percent) occurs on the street outside the victim's home.2 A study conducted in the United Kingdom revealed that a car parked on the street is much more likely to be targeted by criminals than a car parked in a driveway, as can be seen in Table 1.3 Hampshire (United Kingdom) police discovered that nearly one-half of all car crimes in Portsmouth occurred on only about 10 percent of the city's streets and that the pattern was even further concentrated within those streets.4

Cars in residential locations that are adjacent to lower-tier socioeconomic neighborhoods (which often have higher crime rates) are generally more vulnerable. Thieves who reside in the high-crime neighborhoods need only walk a few blocks to search for items or cars to steal. They have the advantage of being familiar with the area.

Residential subdivisions. Residential subdivisions surrounded by rural lands and not served by public transportation are less likely to suffer from chronic car crime. Thieves would have to travel to the location, and then walk around in unfamiliar neighborhoods where they are more likely to appear out of place and attract suspicion. Also, these areas often have no sidewalks, so pedestrian traffic in general draws attention.

Thefts of and from cars in suburban residential areas generally occur at night. This is because it is the time most cars are present in these areas, as well as the fact that darkness provides cover for the thieves. In residential areas that contain multi-family apartment complexes, parking lots can be vulnerable to thefts during the day because there are many people using the lots, thus providing anonymity to the offender. Some special events that draw large numbers of vehicles to an area also generate high volumes of thefts from cars.5

Data on the most frequently stolen new cars and parts are compiled by the Highway Loss Data Institute (www.iihs.org) and the Insurance Information Institute (www.iii.org) and are published annually online. Data on the theft of older model cars are reported by the National Insurance Crime Bureau (NICB) (www.nicb.org). In general, older models of cars are more often stolen than more recent models because fewer of them contain in-built anti-theft devices, and thieves learn that particular models of cars are easier to steal than others. However, newer models may be targeted for theft if they contain expensive components in great demand (on the next page).

Frequently, thefts from cars will occur in clusters. Numerous larcenies may be reported during the early morning hours when one or more thieves have passed through a neighborhood looking for property to steal. In general, two kinds of property are stolen: personal items and car components. Personal items that owners may leave in their cars include loose change, laptop computers, portable music players, and wallets or pocket books. The United Kingdom Home Office reported that personal valuables inside the passenger compartment accounted for 35 percent of items stolen, while stereo components made up 27 percent of the stolen items.6 Compact discs as well as car stereo parts and accessories can easily be traded for cash at second-hand music stores or pawnshops. These items can also be difficult to trace, as few owners take the time to record the serial numbers of after-market stereo components. Targeted car components change as the different features become highly valued. For a time stereo equipment was targeted, but now air bags and expensive parts such as high-intensity discharge or xenon headlamps are prized.§ The National Insurance Crime Bureau (NICB) reports more than 75,000 thefts of airbags annually.7 Many of the techniques associated with stealing cars for parts or resale differ from thefts of personal items from cars.8

§ The Highway Loss Data Institute reported that the 2002 and 2003 Nissan Maxima was most often targeted for theft of its high-intensity discharge headlamps in 2003. 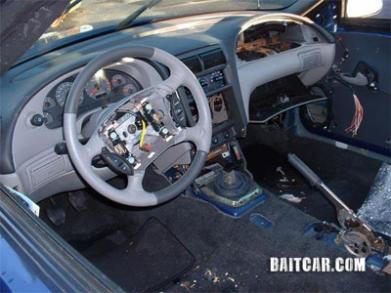 A Ford Mustang stripped of its airbags and other interior components. Credit: www.baitcar.com

Thefts of and from Cars on Residential Streets & Driveways

Not all car thieves are non-violent criminals. Stolen cars are used as tools to facilitated other crimes such as drug trafficking or as "getaway" vehicles in robberies or burglaries.