Thefts of and From Cars in Parking Facilities

The Problem of Thefts of and From Cars in Parking Facilities

Car-related thefts are among the most common offenses calling for a police response.1 This guide summarizes information on risk factors and evaluates published literature on dealing with such thefts in parking facilities. It also identifies information police should collect to understand and respond effectively to their local problem.

The guide covers both thefts of and thefts from cars in parking facilities. Each category of theft covers a wide range of offenses, committed by different groups of offenders with different motivations.

Thefts of cars are much more often reported to the police due to insurance requirements, the potentially greater loss and the fact that police might help find stolen cars that are later abandoned. However, theft from cars is the larger category, constituting about 85 percent of all car-related thefts.§

§ This figure is based on victimization data and includes crimes not reported to the police (Clarke and Harris 1992).

Most thefts occur when cars are parked on the street or on the owner's property, because this is where cars usually are, but the risk of theft, per hour parked, is greater when cars are in parking facilities.§§ These are often poorly secured, particularly in the case of lots, many of which have poor lighting, and blind spots and nooks where cars cannot easily be seen. There is seldom much surveillance by passersby or attendants in such lots. Many attendants' booths are badly positioned or have small windows and poor visibility. Many lots have ill-tended shrubbery providing cover for thieves, and are open to pedestrians, which makes it easy for offenders to enter.2

Click here for a table showing the risks of car theft in different places.

The parking facilities covered in this guide include lots and decks (and underground garages) that serve office and factory workers, students, shoppers, entertainment-seekers, train and bus commuters, and airline travelers.

While it is important for police officers to understand the specific nature of their local problem, particularly who is committing the offenses, and why, this guide deals only briefly with enforcement. While arresting car thieves might have some immediate benefits, it is likely that new offenders will take their place if the conditions facilitating theft are not addressed. For this reason, the principal focus of this review is the lots and decks themselves, and measures to make them more secure. It will be clear that solutions to the problem require collaboration between police, the public, business owners, city officials, prosecutors, and parking facility owners and operators.

§ Twenty-five percent of vehicle thefts reported to U.S. police do not involve cars, but rather trucks, motorcycles and other vehicles.

Factors Contributing to Theft of and From Cars in Parking Facilities

Understanding the factors that contribute to your problem will help you frame your own local analysis questions, determine good measures of effectiveness, recognize key intervention points, and select appropriate responses. Because thefts of and from cars cover many different offenses, it is difficult to summarize briefly all the factors that have been found to contribute to theft. In fact, more research exists on risk factors related to theft of cars than theft from cars. The factors listed below are the main ones the published literature consistently identifies.

Most car security is inadequate. Thieves report being able to break into and drive away with most makes and models in a matter of minutes, if not seconds. The best approach to prevention relies on persuading manufacturers to make more secure cars, and much has been accomplished along these lines in recent years.3 However, this response is not practical for police having to deal with a local problem of theft in parking facilities. Instead, they must seek to understand the specific combination of risk factors contributing to high levels of theft in local facilities.

Considerable variation in car theft rates exists across the United States, and a local problem of theft from parking facilities might be part of a wider regional problem. Car theft rates are generally much higher in urban than rural areas, because thieves have more cars to target. There is also considerable variation between cities. The reasons for this are not well understood, though cities with large ports or near the Mexican border have especially high theft rates due to theft for export.§

§ U.S. cities near the Mexican border experience higher theft rates for makes and models sold in both Mexico and America (Field, Clarke and Harris 1991).

Some of the variation in car theft rates between cities is due to the population of cars at risk, as some makes and models that thieves find attractive are more common in certain parts of the country.§ Research has also shown that particular kinds of thieves favor certain models. Thus, joyriders favor cars that are fun to drive, with good acceleration, while professional thieves generally steal expensive cars that may be exported or older cars that are "chopped."4

Park-and-ride commuter lots have particularly high theft rates.6 They tend to be large and hold many cars left unattended by their owners for most of the day. Where there are attendants, they may be present only at the beginning and end of the day. Thieves can often operate in these lots with little chance of detection.

Parking facilities catering to young people, such as college campus lots, may also be at greater risk. Thieves may be other users of the lots, or attracted to the kinds of cars parked there. Finally, parking facilities used around the clock tend to have higher theft rates, if for no other reason than thieves can always find targets there. 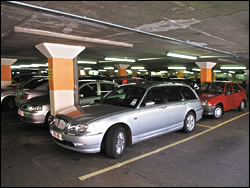 Parking decks have lower theft rates than lots. A Charlotte, North Carolina, study found that the risk of theft from cars was about six times greater in center city lots than in decks.7 Similar results have been found in Britain. The greater security of decks is explained by two factors. First, many more decks and garages are staffed by attendants, whose primary function is to collect parking fees, but who also exercise some surveillance. Second, deck and garage design makes it harder for thieves to gain access to parked cars. Vehicle access is often limited to a single entrance which also serves as an exit and fee-collection point. Pedestrian movement in and out of decks and garages is generally restricted to elevators and stairwells so that a thief carrying stolen items may come into contact with others coming and going. Thieves in lots can make a quicker getaway through a route of their own choosing with greater certainty that they, and the items they are carrying, will not be seen.§

§ According to British research, the difference between lots and decks is greater for theft of cars, because drivers exiting decks usually have to surrender the ticket obtained on entering. On the other hand, thieves can legitimately enter a deck in a car and break into other cars parked on the upper levels, where attendants rarely go. 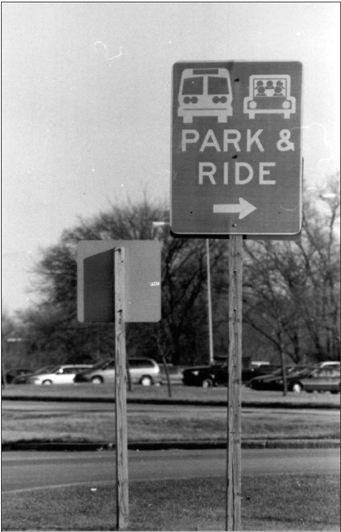 The lack of access controls and/or supervision contributes to high theft rates in some parking lots. These deficiencies are principally due to economics, as parking lots are often built on land awaiting development. In the meantime, lot operators seek to provide parking at minimum cost. Thus they are reluctant to install high-quality lighting, which improves natural surveillance, or to hire attendants to collect fees.

Due to the expense, operators are generally reluctant to fence lots or install automatic barriers at entrances and exits. Thieves can wander through the lots at will, looking for cars to break into or steal. British research found that lots with pedestrian throughways experienced higher theft rates. The same study found that lots located within sight of nearby shops had lower theft rates, a fact the researchers attributed to the natural surveillance provided by shoppers and shop employees.9

Thefts of and from Cars in Parking Facilities