Physical and Emotional Abuse of the Elderly

The Problem of Elder Physical and Emotional Abuse

This guide begins by describing the problem of elder physical and psychological abuse and reviewing factors that increase its risks. It then identifies a series of questions to help you analyze your local elder abuse problem. Finally, it reviews responses to the problem and what is known about these from evaluative research and police practice.

These figures underestimate the extent of elder physical and emotional abuse. Some older victims are unable to report their victimization because of cognitive impairments, and others are reluctant to report their mistreatment for one or more of the following reasons:

Less than a third of elder physical abuse victims contact the police about their victimization.7

Even though emotional abuse is the most frequent type of elder maltreatment—estimates suggest that approximately one in twenty older persons are emotionally/psychologically abused each year8—victims are especially unlikely to report emotionally abusive acts, primarily because there are no visible injuries and they may fear the consequences of reporting.9

Regarding abuses occurring in institutional settings, a survey of nursing assistants from 10 nursing homes participating in an abuse prevention training program found that roughly one in six reported engaging in physically abusive behaviors and about half reported yelling at residents in the previous 30 days.13 There is some evidence that for-profit homes have more abuse complaints than nonprofit homes.14 Larger facilities also have a higher rate of complaints. While some have suggested that living in a nursing home is a risk factor for physical and emotional abuse, an estimated 90 percent of abuse cases reported to adult protective services (APS) occur in domestic settings.15 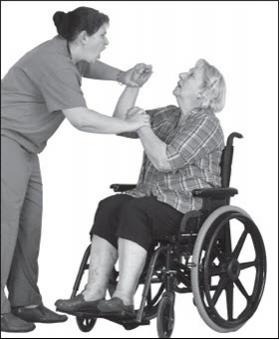 A survey of nursing assistants found that one in six reported engaging in physical abuse and about half reported yelling at residents.
Photo Credit: Shutterstock Photo No: 105457523

In long-term-care settings, the majority of physical and emotional abuse is committed by nurse's assistants.20 Part of the reason that assistants have higher rates of abusive behavior is simply that they have more contact with residents than other staff. Another reason may be that the licensing and educational requirements for nurse's assistants are much lower than they are for nurses, physicians, directors, and other long-term-care staff.21

Laws of various kinds define elder physical and emotional abuse or prescribe the legal interventions available in these cases. These laws include:

Forty-nine states and the District of Columbia define elder maltreatment laws in their protective services legislation.23 Emotional abuse is prohibited in the APS statutes of 42 states.24 Some states have laws requiring APS workers and the police to share information on certain types of cases.25

Both elder physical and emotional abuse can have a devastating impact on victims, their family members, and communities. The consequences of these offenses include:

Researchers have only recently begun to explore the ties between mortality and elder abuse. One study found that elder abuse victims are about three times more likely to die prematurely than non-abuse victims.29 It is believed that many elder homicides are misclassified as deaths due to natural causes.

Understanding the factors that contribute to your problem will help you frame your own local analysis questions, determine appropriate effectiveness measures, recognize key intervention points, and select appropriate responses. This guide identifies the most common factors contributing to elder physical and emotional abuse. In some instances, additional factors may lead to abuse. After working with the various stakeholders involved in the collaborative response to elder abuse, law enforcement personnel will be able to identify risk factors that may not be addressed in this guide.

Elder abuse researchers and criminologists have cited various explanations for elder physical and emotional abuse. These explanations are easily understood through an examination of vulnerable targets, offender motivations, the absence of guardianship, and community and cultural factors.

Not all older persons experience victimization. Certain factors increase an older person's risk. Two commonly cited risk factors are the presence of Alzheimer's/dementia and dependency. Providing care to individuals with Alzheimer's and related forms of dementia is especially challenging and may increase the odds of committing abusive acts. In some situations, caregivers react to violent behaviors initiated by the individual with dementia, while in others the caregiver's aggression is tied to the strain that caregivers experience. Approximately one in ten caregivers of those with dementia reported physically abusing the individual in their care.30 Spouses are more likely to be violent toward care recipients who suffer from dementia, especially if they live in the same residence and if the care recipient sometimes hits the caregiver or is otherwise disruptive.31

Older individuals' dependence on their relatives has also been cited as a factor that makes them more vulnerable. Gerontologists use the phrase "generational inversion" to refer to the process by which older individuals lose their independence and become more dependent on relatives who once depended on them. The dependence can be emotional, logistical, or financial.32 Elders with cognitive impairments are especially dependent on others and this dependence increases the risk of victimization. About one-fourth of those dependent on others have experienced elder emotional abuse.33

The nature of the dependence may influence the victim's decision to contact the police. Being dependent on another person for care may cause victims to think about the consequences of not having the offender present to provide care. Dependence on a spouse for care inhibits older persons from reporting physical or emotional abuse by that person.34 Dependency varies across older persons. As a group, elderly persons are not nearly as dependent on younger persons as some may believe. Older people who report being mistreated are especially able to maintain independence in the criminal justice system and do things that make the system work for their interests.35

The more socially isolated older individuals are, the more at risk they are for physical abuse.45 Socially isolated individuals are less likely to be protected by loved ones, public safety professionals, or other potential guardians. Isolation is so problematic in elder abuse cases that some have argued that when individuals actively isolate older persons to gain power and control over their lives, this amounts to emotional abuse.46 It is also argued that the isolation found in long-term-care settings may place residents at a higher risk for maltreatment.47

Community and cultural factors also contribute to elder physical and emotional abuse. In some cities, high poverty rates contribute to unemployment, which leads to adult offspring living at home with their aging parents. As noted, having unemployed adults live at home with aging relatives is a risk factor for elder maltreatment. In addition, residents providing care to Alzheimer's patients in disadvantaged areas are less likely to accept formal services, which may place them at a higher risk for maltreatment.48 Also, services available for older victims vary across rural and urban communities.49 Fewer services not only put individuals in some communities at higher risk for victimization, but the consequences of victimization are more difficult to address when certain services are not available.

Community factors also bear on institutional abuses. Urban areas, for example, have been found to have higher abuse rates in nursing homes.50 This difference potentially stems from the higher crime rates found in urban areas, and the difficulties of finding appropriate staff for these positions in these communities. In addition, nursing homes are distributed unequally across cities, making it more difficult for some loved ones to act as de facto guardians by visiting their aging relatives.

Cultural factors may also promote elder abuse. Cultures with high respect for the elderly have lower elder abuse rates.51 Cultures that devalue the elderly, in turn, promote values and behaviors that place older persons at risk. Ageism refers to attitudes or practices that systemically discriminate against the elderly population. Ageist attitudes foster abusive behaviors. In addition, a culture's level of altruism (willingness to help others) is tied to elder abuse. For example, institutional abuses have been tied to a culture's willingness to devote scarce financial resources to help those in need. The more charitable counties are, the lower their rate of institutional abuses.52 Similarly, putting profit (a cultural value) before high-quality health care places older individuals at risk for patient abuse.