Responses to the Problem of Home Invasion Robbery

The following response strategies provide a foundation of ideas for addressing your particular problem. These strategies are drawn from a variety of research studies and police reports. Several of these strategies may apply to your community's problem.

It is critical that you tailor responses to local circumstances and that you can justify each response based on reliable analysis. In most cases, an effective strategy will involve implementing several different responses. Law enforcement responses alone are seldom effective in reducing or solving the problem.

Do not limit yourself to considering what police can do: carefully consider whether others in your community share responsibility for the problem and can help police better respond to it. The primary responsibility of responding, in some cases, may need to be shifted toward those who have the capacity to make more effective responses. For detailed information on shifting and sharing responsibility, see Response Guide No. 3, Shifting and Sharing Responsibility for Public Safety Problems.

For further information on managing the implementation of response strategies, see Problem-Solving Tools Guide No. 7, Implementing Responses to Problems.

The relative rarity of home robberies suggests that opportunities for this crime are already low, so they may be perpetrated by only a few offenders.71 Therefore, controlling repeat offenders may be the most promising response, whereas location- and victim-based responses are likely to be less effective.

Many of the responses listed below could address general crime problems but could also help reduce home robberies. The responses that are not specific to home invasion robbery may be less effective as stand-alone or primary strategies. For example, recommending that the police disrupt stolen goods markets simply to reduce home robberies is less realistic (because they are so rare) than if it is also intended to address residential burglary, shoplifting, or street robbery.

The following specific responses are organized around the home invasion robbery analysis triangle. Responding specifically to home robbery is challenging, because incidents may consist of several related problems, such as assault, rape, stolen goods markets, or drug trafficking, each requiring a special type of response. Furthermore, cons and push-ins of senior citizens, for instance, differ from home robberies of drug dealers. Thus, some responses may be effective for all home robberies, but others may only work for one or certain types. You must determine which responses are useful for the specific problem you are addressing. After each response heading, we identify in parentheses the types of home robbery to which the response is most applicable and the time block it addresses.

1. Disrupting offender groups (home robberies in general; long before). Home robberies may occur sporadically (given the level of difficulty and planning), so identifying a series of them early and determining how to disrupt or deter the responsible group may be one of the most important strategies. Monitoring a robbery series could be part of a multi-strategy response.

2. Using intelligence to target known offenders (robberies in general; long before). Given their rarity and victims' low level of reporting, gathering information on home robberies is likely to be difficult. As part of Operation Trio, South African police dealing with serious residential robbery problems were given resources to collect intelligence on offenders, which led to a 44 percent increase in arrests.72 Analyzing other robbery-related crimes (e.g., drug dealing) could also help you identify repeat home robbers in your community (who could be a relatively few). (This response is applicable to general crime problems and not specific to home invasion robbery.)

3. Using handlers to control offenders (robberies in general; long before). In some cases, family and friends know about a home robber's criminal activities.73 These "handlers," along with teachers, employers, and probation/parole officers, could exert some control over an offender's actions. They could also remove excuses for offending by setting rules or controlling drugs and alcohol use, which may be a factor in offending.† (This response is applicable to general crime problems and not specific to home invasion robbery.)

4. Diverting potential offenders (robberies in general; long before). Diversion strategies depend on the offender's needs (such as providing employment services to those without legitimate work). You could also work with local schools or parks and recreation departments to create after-school activities to divert young offenders. (This response is applicable to general crime problems and not specific to home invasion robbery.)

5. Disrupting stolen goods markets (noncash/drug robberies; after). This is appropriate if offenders target noncash items for resale. Pawn shops may partner in prevention, because they lose money from taking stolen items.74 Disrupting markets is less effective if offenders sell items to illegal fences or friends or online (e.g., eBay and Craigslist) and likewise if they take only cash, or keep the items, or trade them (e.g., for drugs), or give them away.75, ‡ (This response is applicable to general crime problems and not specific to home invasion robbery.)

6. Improving victims' reporting (varies by type of victim; after). Information provided by victims helps police identify offenders and offense patterns. Operation Eagle Eye, a U.K. anti-street robbery initiative, improved the victim's reporting experience in several ways in an effort to encourage reporting.76 Victims were automatically referred to support groups, continually updated on their case, and could use pseudonyms to ensure anonymity and protection from retaliation. This response is less useful for victims who are involved in crime (thus drug dealers are unlikely to report regardless). In theory, victims who are themselves criminals might be induced to cooperate with police and prosecutors through offers of protection or qualified immunity or threats of their own prosecution. But in practice, most such offenders fear retaliation from other offenders for cooperating with authorities more than they fear arrest and prosecution.77 (This response is applicable to general crime problems and not specific to home invasion robbery.)

7. Launching a home robbery awareness campaign (varies by attack type; long before). Citizens could underestimate their risk of victimization, let alone their risk of certain types of home robbery (e.g., blitzes versus cons). The New York City Police Department held meetings in neighborhoods where push-ins were common, warning residents about ruses (such as knocking on the door claiming to be a service worker).78 Your agency could pursue its own anti-robbery awareness campaigns, partnering with local media and government, and employ multiple tactics, such as radio call-in programs (so residents can speak to police about the problem), crime prevention displays in public places, and distribution of safety leaflets.79 Whatever the approach, the campaign should include information on improving home and personal safety.80 It should also target people directly at risk of robbery.† Since home robberies are rare and may involve familiar persons, you should consider whether raising awareness justifies potentially increasing fear, especially among senior citizens. At a minimum, you should signal in your press releases these characteristics: this helps alleviate citizens' fear of being randomly targeted.81

8. Making senior citizens less vulnerable (varies by attack type; long before). If senior citizens are commonly targeted, focus on the factors causing this pattern. For example, police in Pelham Parkway in the Bronx, New York City, observed a 60 percent increase in push-ins over a 2-month period (most involving seniors). They discovered many seniors did not have peepholes and were opening doors to strangers. With support from a state grant, the police, community organizations, and a local company, 750 peepholes were installed. A sharp reduction in robberies followed.82 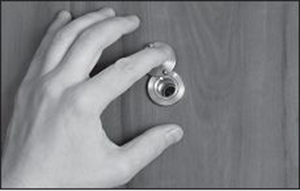 9. Making some cultures less vulnerable (home robberies in general; long before). Members of certain Asian communities, temporary workers, and illegal immigrants may be targeted because they keep cash at home, rather than in banks, and may not report crimes to police.83 Your agency could work with community social and cultural agencies to make these groups more aware of the risk of home invasion. In Virginia, for instance, a U.S. Representative met with community groups, police, and the Asian community to discuss the home invasion robbery problem.84 Such forums can be used to offer prevention tips (e.g., encouraging banking) and to build trust with police.

10. Partnering with local service companies (con robberies; long before). Utility companies could attach crime prevention information to their bills, including a photo of the worker's ID badge, along with a warning about allowing unauthorized persons access to one's home.85

11. Encouraging victim compliance (home robberies in general; during). Victims may naturally want to defend themselves, but home robbers may avoid using violence if they comply.86 Information about victim compliance could be distributed as part of an awareness campaign. This response will not reduce home robbery incidents, but it could reduce deaths or injuries.

12. Increasing dwelling visibility (blitz and surprise robberies; long before). Home robbers dislike homes highly visible to neighbors.87 Occupants should remove any potential hiding spots around their property or anything that obstructs natural surveillance by neighbors (including parked cars, overgrown trees, shrubbery, and planters).

13. Securing dwellings externally (blitz, push-in, and surprise robberies; just before). Home robbers who break in consider a variety of features related to home access, including fencing/razor wire, security lights, the strength of doors/gates, dogs, and perimeter alarms (e.g., in gardens or along outside walls).88 When facing a specific home robbery problem, consider what access-control measures would work best (e.g., reinforcing doors to address "door kick" blitzes).89 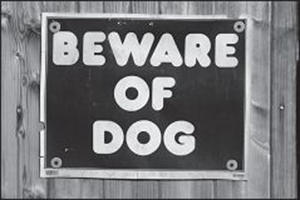 Clear indicators that dogs are in a home can deter home invasions.
Photo Credit: Shutterstock Photo No: 66137

14. Securing dwellings internally (blitz, push-in and surprise robberies; just before). When planning a home invasion, robbers consider internal security, preferring homes in which security alarms are not likely to be on.90 You could encourage occupants to activate alarms when they are home or use alarms with panic buttons that they can quickly access if the main security system is off. Home robbers also dislike homes with drawn curtains, because they cannot locate or count occupants, so installing curtains is a quick and inexpensive response.91

15. Increasing occupancy indicators (home robberies in general; just before). This strategy is used to deter residential burglars who prefer unoccupied dwellings.† For home robbery, the key is convincing offenders that more than one occupant is home (e.g., lighting multiple rooms), since they prefer dealing with one occupant. However, occupancy indicators could attract home robbers, since they target occupied dwellings.

16. Increasing broad surveillance and access control. As noted, home robberies may not be geographically concentrated, so identifying hotspots is likely to be difficult. This makes installing closed circuit television (CCTV), improving lighting, and closing streets and alleys less promising responses. For example, installing one or a few CCTV devices would be insufficient for a series of home robbery spanning multiple neighborhoods. Furthermore, in the unlikely event that CCTV captured a home robbery, only the offender's entry would be visible (not the act of robbery inside the home). CCTV or lighting, however, could be more effective at apartment complexes or senior citizen homes, which have multiple residences and a single entry point.92

17. Deploying visible vehicle directed patrols. Directed patrols could be part of another task force or multi-response strategy. They are most effective when proactive and highly visible. You should not consider crackdown techniques, like directed patrols, a long-term strategy, because their impact is often temporary.† For home robbery, foot patrols are apt to be ineffective, since offenders may target entire neighborhoods as opposed to discrete places (such as an alley popular with street robbers).

† See Response Guide No.1, The Benefits and Consequences of Police Crackdowns for further information.