This guide describes best practices for the implementation and uses of acoustic gunshot detection systems (AGDS). These systems can instantaneously detect and report gunfire, facilitating the police response to gunfire incidents and assisting with evidence recovery. Over the last decade, many large- and medium-sized cities have deployed AGDS, including mobile and camera-integrated systems. Despite growing deployments of AGDS, most police agencies use these systems to facilitate only the immediate response and investigation of gunfire, but the technology can also potentially identify high-risk locations to receive targeted preventative interventions.1

Scope of the Guide

This guide covers the basic principles that drive the technology and the current state of research on what does and does not work, including approaches that are promising but have not specifically been implemented with AGDS. It does not cover the technical details of the technology, such as the algorithms to filter gunfire from other sounds.

AGDS is most likely to be useful in the context of the following policing problems, some of which are topics in the Problem-Specific Guides series (indicated by asterisks):

• Assaults in and around bars*

AGDS is also likely to be used in conjunction with other police responses, some of which are topics of other Response Guides (indicated by asterisks), such as the following:

• Crime and disorder in urban parks*

Although gunshot detection can use either optical or acoustic monitoring, police typically do not use the former because it requires a direct line of sight.2 Acoustic detection takes advantage of the sound waves produced by the muzzle blast or the sonic boom generated by a bullet as it travels through the air.3 Most commercially available systems use muzzle-blast information because it enables better triangulation of the point of origin. Usually, an array of microphones forms a listening network. Detecting the point of the projectile impact is possible 4 but is of secondary interest, since casings are typically more abundant and therefore easier to match to a firearm than the projectile. In addition, many projectiles become too deformed or damaged to assist police in their investigation. Acoustic sensors are typically placed at specific intervals to create a grid with adequate coverage for the area of interest. In the grid depicted in Figure 1, the near-constant speed of sound waves (About 375 yards or 1,125 feet per second at 68 degrees Fahrenheit †) is leveraged to locate the point of origin for loud noises because the sensors pick up this noise at slightly different times. 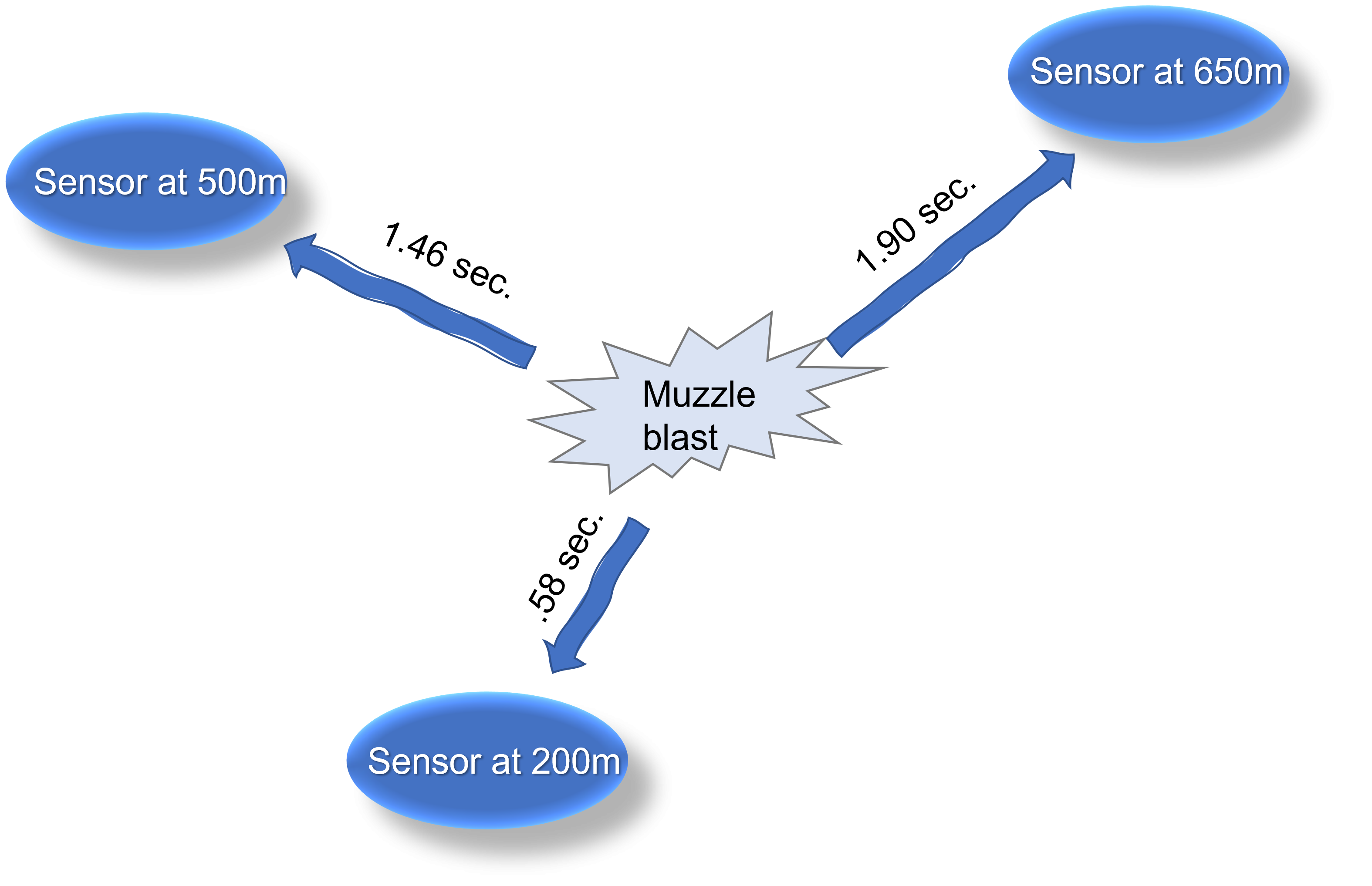 Acoustic systems are activated by a range of loud noises. The systems subsequently process the sounds through a detection algorithm that identifies the type of sound (gunfire, fireworks, exhaust backfires, etc.). In some cases, loud sounds can be misidentified or mislocated 5 for a variety of reasons. For example, the algorithm may have difficulty identifying the sound, or weather may interfere. High wind, thunder, and rain can create background noises that drown out gunfire.

False positives (i.e., non-gunfire identified as gunfire) and false negatives (i.e., gunfire that is entirely missed or misidentified as another sound) do occur, although the exact error rate can be difficult to establish in real-life applications.6 Some vendors, therefore, include additional human review before notifying the police. Depending on the system, the notification process can take between a few seconds for fully automated systems to about a minute for systems with human review (see Figure 2).

Note: The arrow width is indicative of the number of alerts only; it is not exactly proportionate.