The Problem of Disorderly Youth in Public Places

Disorderly youth† in public places constitute one of the most common problems most police agencies must handle. Dealing with youth disorder requires a significant amount of police time, particularly in suburban and rural communities. Disorderly youth are a common source of complaints from urban residents and merchants, as well as from shoppers and merchants in malls and business districts Dealing with youth disorder appropriately requires considerable police skill and sensitivity. Officers must balance youths' rights against complainants' rights, distinguish legitimate from illegitimate complaints, at times be firm and at times be flexible with young people, and remain sensitive to how the public will perceive police actions.

† For the purposes of this guide, the terms youth, young people and teenagers are used interchangeably, with the understanding that some individuals discussed may not fall within the age ranges typically associated with these terms.

Disorderly youth in public places are only one of many disorder and youth-related problems police must handle. This guide addresses the relatively minor, but often highly annoying, misconduct associated with youth congregating in public. This guide does not address the more serious misconduct associated with youth gang violence and intimidation. Additional disorder and youth-related problems include:

That young people will congregate in public is both inevitable and socially necessary. Congregating is part of the rite of passage from childhood to adulthood, allowing youth to socialize and bond with their peers, out of their parent's view. Young people's self-identity and self-worth are profoundly shaped by how they believe their peers perceive them, and gathering in public provides opportunities to see, and be seen by, others. Group settings provide a relatively safe context for teenagers to flirt and pair up with one another, supported and protected by their friends.

Because youth congregation in public is so ordinary and normal, you must first determine if youths' conduct is actually disorderly and worthy of police attention. You must use sound judgment in deciding how to define the problem. Sometimes you will find that the heart of the problem is complaints that are either exaggerated or motivated by bias, in which case your responses should focus on educating complainants rather than controlling youths' conduct. Whether the conduct is deemed disorderly depends on many factors, including: 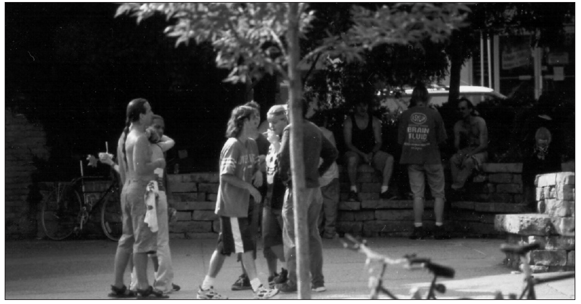 Congregating in public is an important aspect of youth socialization. Credit: Kip Kellogg 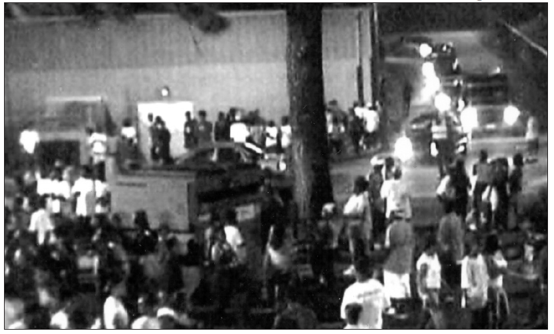 The sheer number of youth hanging out, such as around this roller skating rink, can generate public concern. Credit: Savannah Police Department

Communities are often divided over what constitutes acceptable youth conduct. This is especially true in areas undergoing substantial demographic change—for example, an influx of youth where older residents predominated, or an influx of a new ethnic or racial group. Some misconduct, even if accepted by the community, might not be tolerable from a legal standpoint. Conversely, some youth conduct may bother some community members, but may be perfectly legal, perhaps even constitutionally protected. You must balance youths' right to congregate in public against others' right to be free from annoyance, harassment and intimidation. Furthermore, the legal grounds for disrupting youth gatherings in public are typically vague. It is easy to get frustrated by demands to control disorderly youth where no clear legal authority to do so exists.

Young people often do not fully appreciate their conduct's effect on others. What they believe to be normal and legitimate behavior can sometimes make others apprehensive or afraid. Sometimes the mere presence of large youth groups, or their physical appearance (dress, hairstyles, body piercings, and tattoos), is intimidating regardless of their conduct. People often perceive youth groups congregating in public to be gangs and, therefore, dangerous. The elderly are particularly intimidated by large youth groups. In addition, group size may influence individual behavior—teenagers often behave in front of a group of peers in ways they would not if they were alone or in pairs. 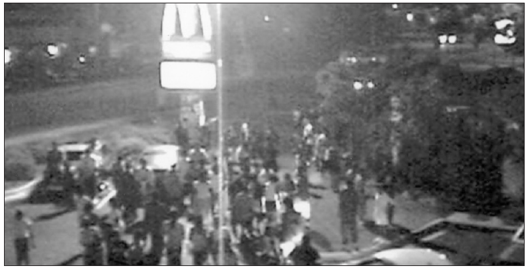 Such problem behavior most commonly occurs

Disorderly youth are of particular concern to merchants because their presence intimidates shoppers, threatening revenues. Shoppers also frequently cite menacing youth as among their primary safety concerns.2However, young people themselves are a source of current and future revenue and, if treated poorly by merchants, will likely remember that treatment years later when choosing where to spend their money. Merchants are more likely to tolerate some disorderly behavior if the young people are also regular customers. You should be alert to these commercial interests.

Youth surveys have identified some common complaints teenagers have about their opportunities to socialize in public, and about how authorities treat them.3Their complaints include the following:

Young people typically say they want a place where they can hang out without excessive supervision, where they have some source of food and entertainment, where they have protection from the weather, and where they are safe from attack by rival groups.