The Problem of Cruising

This guide begins by describing the problem of cruising, and reviewing factors that contribute to it. It then identifies a series of questions to help you analyze your local cruising problem. Finally, it reviews responses to the problem, and what is known about them from evaluative research and police practice.

You should note that while both cruising and street racing involve vehicles, some primary differences exist between them. Cruising is a pastime largely confined to downtown areas; sanctioned cruising can also provide an economic boost to the community.† Conversely, street racing is typically an underground affair, causing many related problems.

The simplest definition of cruising is "unnecessary repetitive driving."1 Attempts to legally define cruising have been more difficult, however, as people have successfully challenged anti-cruising ordinances in court on constitutional grounds.

Since at least the 1950s, people have cruised for a variety of reasons: to show off their own car, to see other people's cars, to find racing competitors, to impress members of the opposite sex, and to socialize.2 Reinvigorated and glamorized by popular films such as American Graffiti, cruising remains an enormously popular rite of passage for many young people.3 Today's cruisers drive a variety of vehicles: classic cars, pickup trucks, mini-trucks, muscle cars, lowriders (whose chassis narrowly clear the ground), and even motorcycles. Cruisers are particularly prevalent on Friday and Saturday nights, and they can number in the thousands. 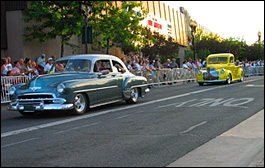 Among the most common cruisers are the owners of classic, restored and custom cars, who most often view the activity as an opportunity to showcase their automobiles. Credit: Nattalie Hoch

But cruising is not purely harmless fun. It creates problems for the police, nonparticipating motorists, some businesses, and the community at large. Among them are

In some jurisdictions, cruisers have divided up along racial, ethnic, and subcultural lines: blacks, Hispanics, punkers and heavy metal groups, the cowboy/western set, and so forth. Sometimes these divisions lead to group conflicts and violence, causing injury to participants and innocent bystanders and heightening fear in the wider community.4 In some jurisdictions, cruising has taken on a "rock concert" environment in which disorder, violence, and police enforcement are integral to the experience, and even expected and desired by the participants.5

There are several cruising-related problems police must also address. These call for separate analyses and responses, and are not directly addressed in this guide: 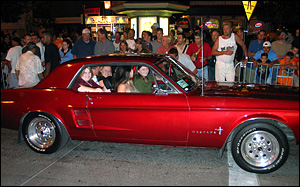 Since the 1940s, teenagers have had easier access to cars, and cruising has become a popular pastime. Everyone used to meet at drive-in restaurants. Two drive-in restaurants often anchored the ends of a cruise route where cars would "drag." Although there has been widespread closing of drive-ins since the 1970s, young people still find places to cruise.

Cruising remains popular for many reasons: