What Does Research Reveal About Street Access and Crime?

Researchers have argued that closing neighborhood streets and alleys can prevent crime because there is a relationship between street access and crime rates. The details of the argument are as follows:

Research findings are generally consistent with this theory: 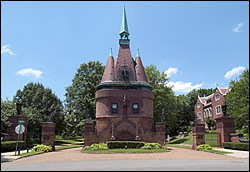 Ornate gated entrances to private streets, such as these in St. Louis, can effectively control crime problems, but are not feasible for most crime prevention initiatives. Photo credit: Michael S. Scott