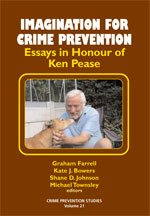 Imagination for Crime Prevention: Essays in Honour of Ken Pease

This paper offers a first history of crime science, a term originally coined by Nick Ross to reflect his concerns at what he saw as the failure of the criminal justice system to respond effectively to crime and the potential of a more scientific approach to its control. We begin by describing more fully what is distinctive about the methods and aspirations of crime science. We then move on to discuss streams of existing research that have provided the main foundations of and rationale for the new discipline. Having looked to its past, we then turn to the developing agenda for crime science. Here we lay out the promising areas that are likely, we think, to prove fruitful in coming years.

Ken Pease is one of those rare individuals who spans the entire field of criminology. A key aspect of this breadth is his ability to switch focus between situational and offender-oriented causes and interventions. This chapter aims to develop this theme by charting the evolving concept of the offender in crime science from the two-dimensional figure of rational offending models to complex adversary. The aim is more to stimulate discussion than to produce a definitive framework, but undoubtedly crime science needs such a framework if we are to cope with, and exploit, the range and diversity of causes and interventions at an equally varied set of levels and perspectives suggested by this brief review of the enriched offender concept. These include the rational view from the offender; the wider phenomenological equivalent; the causal-mechanism view of the offender; and the ecological perspectives of Routine Activities Theory, the Conjunction of Criminal Opportunity, opportunity structures and niches. Ashbys (1957) Law of Requisite Variety says that for a model to be useful and usable in capturing and manipulating some aspect of the world, it must itself be sufficiently complex internally to handle and reflect enough of the variety in the reality it is intended to represent. Cautiously enriching the model of the offender is a task that should repay investment.

Sustainability versus Safety: Confusion, Conflict and Contradiction in Designing out Crime
by Rachel Armitage

This chapter highlights the confusing and contradictory policy and guidance within the field of designing out crime within the built environment and challenges policy makers to address an issue which, as yet, has remained unresolved. Whilst it is accepted that conflicting research will always exist, the current debate surrounding the criminogenic features of permeable design has diverted practitioners attention from the immediate task of reducing crime. Having highlighted the current conflict within the U.K. planning system, the chapter concludes with a detailed analysis of the specific environmental factors which increase a propertys vulnerability to victimisation. This is presented as a simple, usable risk assessment mechanism to be used by crime reduction practitioners as a means of identifying which properties will become vulnerable to crime if built (therefore allowing them to challenge planning applications) or, in the case of properties already developed, allowing resources to be directed towards properties at most risk.

Designing Out Crime: Has Section 17 of the UK's Crime and Disorder Act 1998 Been Effective?
by Steve Everson and Peter F. Woodhouse

This study reports on U.K. efforts to stimulate designing out crime via national legislation. Section 17 of the U.K.s Crime and Disorder Act 1998 obliged police, fire, health, local authorities and other agencies to cooperate in the prevention of crime and disorder. The legislation is sufficiently important that its impact and assessment warrants the attention of an international audience. This study presents findings from surveys of the impact upon the workings of police and local government authority personnel plus two in-depth area case studies. As what we believe to be the first published study of its type, it is hoped that the study contributes to the assessment of this type of legislation for crime reduction, and to knowledge relating to practices to promote designing out crime. The study concludes with recommendations for practice.

This chapter illustrates a crime prevention technique based upon the permissible exchange of data as allowed under the U.K.s Crime and Disorder Act 1998. Specifically it proposes an approach which minimises formal data sharing whilst maximising relevance to crime reduction through the development of a risk index for domestic burglary. It owes much to Professor Ken Pease who, at the time of the study was engaged in parallel work for Nottingham City Council and whose imaginative ideas and advice are much in evidence in this paper.

Kings and Castles, Cavemen and Caves: The Impact of Crime on Male Victims
by Mandy Shaw and Sylvia Chenery

Big boys dont cry, or so it has been said in a variety of places in popular culture, including the 1993 film of the same name and a song by the popular music group Extreme. There are also reminders in the academic literature (Goodey, 1997; Sparks, 1996). There is a presumption that the most traumatised victims of crime are females. But what happens, for example, when men feel unable to protect their family and home from repeated burglaries, when they have been socialised into the role of being a protector? How does this affect the role of the keeper of the castle? What sort of psychological impact does this have? Recent research has shown that men often suffer high levels of stress and anxiety in the aftermath of crime, but find difficulty in admitting they need help. This chapter provides examples of male experiences of crime, explores the impacts and discusses the potential for future provision of victim services.

Fear of Crime, Perceived Disorders and Property Crime: A Multivariate Analysis at the Area Level
by Andromachi Tseloni

This work estimates associated models of areas fear of crime, perceived disorders and property crime rates over area characteristics and region of England and Wales via multivariate (multilevel) modelling. This statistical model, which draws upon data from the 2000 British Crime Survey and the 1991 (U.K.) Census at the postcode sector-level, allows for the estimation of any interdependence among the three dependent variables. The study shows that the effects of area characteristics and region on fear of crime, disorders and property crime rates are not uniform. Roughly half of the between-areas covariance of property crime rates, fear of crime and perceived disorders is explained by the areas characteristics and regional dummy variables. The estimated multivariate models of this work, apart from expanding theoretical knowledge, may assist crime prevention efforts via identifying the most efficient measure for a set of targets as well as any diffusion or displacement effects between crime reduction and public reassurance initiatives.

The Cambridge Evaluation of The Effects of CCTV on Crime
by David P. Farrington, Trevor H. Bennett and Brandon C. Welsh

An evaluation of the effects of CCTV in Cambridge city center is described, using before and after measures of crime in experimental and control areas. CCTV had no effect on crime according to survey data, and an undesirable effect on crime according to police records. It is suggested that CCTV may have had no effect on crime in reality but may have caused increased reporting to and/or recording by the police. It is concluded that more high-quality evaluations are needed that seek to disentangle the effects of CCTV from other plausible hypotheses and to investigate moderators and mediators of these effects.

One requisite of efficient crime prevention is an understanding of where crime will most likely happen next. Accordingly, understanding the spatial and temporal distribution of crime is one of the primary aims of environmental criminology. There have been many advances, both theoretical and empirical. However, whilst many of the theories generated and the respective findings are often complimentary, a greater understanding of how to predict the future locations of crime could potentially be reached if it were possible to unify the central ideas. In this chapter our aim is to conceptualise one way in which this may be achieved for the crime of burglary, focusing on the generation of short-term predictions what happens in the next few days rather than on yearly or monthly forecasts. To do this, some of the main theories and approaches to studying crime will be discussed and a simple way of bringing them together suggested.

The concentration of much crime in a few members of any group of homogeneous facilities is quite common and follows a well-known pattern found throughout the physical, biological and social sciences. Like repeat victimization (a closely related phenomenon,) risky facilities provide opportunities for prevention. We explore a variety of explanations for risky facilities; examine measurement problems associated with studying them; list policy options; and conclude by exploring the hypothesis that crime concentration among groups of homogeneous facilities may be the outgrowth of complex dynamic interactions among individuals offenders, targets, and place managers.

Inspired and led by the work of Ken Pease, research into the prevention of repeat victimization has progressed significantly over the last two decades. Here, a victimization survey of prison inmates is examined. It shows that most victimizations of inmates by other inmates are repeats, that most victimizations of inmates by prison staff are repeats, and that inmates who report victimization of one type are more prone to other types of victimization. Likewise, inmates who report discrimination in their access to facilities and services are more likely to report multiple types of discrimination. Further, inmates who are victimized by other inmates are also more likely to be victimized by prison staff and to be discriminated against. While prison facilities might be expected to be a challenging environment in which to develop the prevention of repeat victimization, this should not preclude some effort.