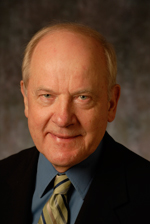 Ronald V. Clarke is University Professor at the School of Criminal Justice, Rutgers University. He previously headed the British government's criminological research department, where he had a significant role in developing situational crime prevention and the British Crime Survey. Clarke is the founding editor of Crime Prevention Studies, and his publications include Designing Out Crime (HMSO 1980), The Reasoning Criminal (Springer-Verlag 1986), Business and Crime Prevention (Criminal Justice Press 1997), and Situational Crime Prevention: Successful Case Studies (Harrow and Heston 1997). Together with Herman Goldstein, he worked on problem-oriented policing projects for the Charlotte-Mecklenburg (N.C.) Police Department. From 1998 to 2004 he chaired the selection committee for the annual Herman Goldstein Award for Excellence in Problem-Oriented Policing. Clarke was the 2015 co-recipient (with Pat Mayhew) of the Stockholm Prize in Criminology. He founded the Center for Conservation Criminology & Ecology at Rutgers University. Clarke holds a doctorate in psychology from the University of London.

Guides by this Author: